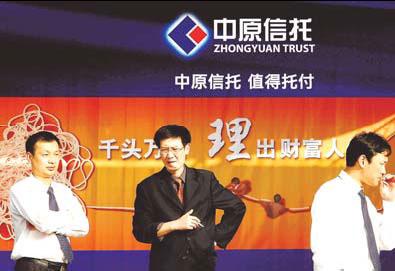 Exhibitors stand in front of an advertisement for a trust company at an exhibition in Zhengzhou, Henan province. [China Daily]

Though the minimum net capital rules for trust companies will impact their business in the short term, the long-term effects are limited, the China Banking Regulatory Commission (CBRC) said on Thursday.

The banking regulator had earlier said trust companies should have a minimum net capital of 200 million yuan ($29.4 million).

The CBRC also said that a trust company's net capital should not be less than the sum of its all risky capital, as well as no less than 40 percent of its net assets.

The regulator said the measures will prevent trust companies from blindly expanding their trust assets scale, and ensure that they have ample assets and liquidity to prevent possible risks.

"Trust companies are among the least protected financial institutions in China and they need to replenish their capital base to prevent potential risks," said Min Luhao, deputy director of the CBRC's Non-banking Department.

The measures are expected to discourage trust companies from selling wealth management products along with banks, as such moves will erode their net capital, and offer much lower returns than other products.

Min said the new measures could affect the operations of trust companies and banks in the short term but the long-term impact is limited.

"The rule could lower banks' earnings from wealth management products but they have the ability to absorb the impact," he said. "The trust companies would still maintain normal operations even if all such products are stopped."

The total assets of the nation's trust companies reached 2.9 trillion yuan this year, a nearly five-fold increase from 600 billion yuan in 2007.

The existing wealth management products in cooperation with banks are valued around 2 trillion yuan and nearly 10 percent of the trust companies' revenues come from such products, the regulator said.

The banking regulator earlier ordered trust companies to stop selling such wealth management products on concern that banks and trusts were forming partnerships and using the products to evade the rules on reining in rampant lending and excess credit.

The regulator also ordered domestic banks to shift off-balance sheet loans linked with trust companies back on to their books by the end of 2011. It also asked the banks to recalculate their capital adequacy ratios and increase provision coverage for extra lending.