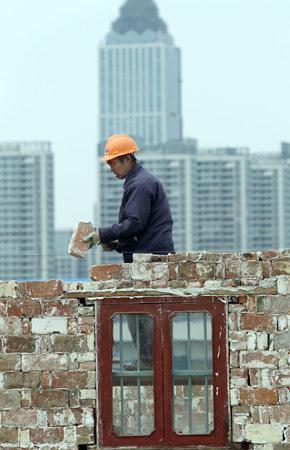 A worker builds a wall at a construction site in Nantong, Jiangsu province. [China Daily]

An increasing number of foreign institutional investors are flooding into China's property market via taking part in the development stage, lured by the sector's high investment returns and the country's solid economic fundamentals.

Statistics from the Ministry of Commerce on Tuesday showed that a total of 114 foreign-funded real estate companies went on the record in November, either for the launch of a new company or to provide a capital boost for those already in existence. The figure is 2.71 times that of October, showing how foreign investors' have quickened their pace in entering China's real estate market.

Meanwhile, most of the companies are located in China's second- and third-tier cities. "There are still good investment opportunities in China's smaller cities, and foreign investors are trying to diversify their investment categories and destinations to hedge risks," said Carlby Xie, head of research and consulting for North China at Colliers International.

Yang Yu, president of the real-estate finance department of Minsheng Banking Corp, said recently that property developers should quicken their investment and shift to second- and third-tier cities which boast solid industrial development potential, and that now is a good time to obtain finance.

In the first 10 months of this year, the utilization of foreign capital in the real estate sector jumped 48.04 percent compared with the same period in 2009. In October the figure hit $8.7 billion.

Grant Ji, director of the investment department of the real estate service provider Savills (Beijing), says foreign investors' soaring interest in China's property market, especially in the development stage, is driven by the expectation of high returns and a comparatively stable market.

"The average investment return of developing a residential project in China could reach 25 percent, much higher than the en-block deals which bring investors a yield of usually less than 10 percent now," said Ji.

Moody's Investor Service said on Tuesday that it has a stable outlook for China's property sector, although a moderate downward price correction is expected during 2011.

"As the most recent set of regulatory measures are enforced more effectively, there emerges the high probability that contracted sales value (a combination of sales volumes and prices) for the Moody's rated portfolio will drop 15 to 20 percent year-on-year in 2011 with respect to current projects," said Kaven Tsang, Moody's assistant vice-president.

"This scenario is manageable for most of our rated developers," said Tsang. "Thus, the stable outlook for the sector remains appropriate, assuming the absence of any further drastic regulatory measures, which we think unlikely at present."

Moreover, China has so far imposed no restrictions on foreign institutions' involvement in the real estate development stage. "On the one hand, the money flowing into the development stage should not be considered 'hot money' seeking a quick return. Yet, on the other, more construction will help to boost supply and ease the pressure for further property price growth," Ji added.

The Ministry of Housing and Urban-Rural Development and the State Administration of Foreign Exchange issued a notice this month, outlining the rules that allow foreign citizens living in China to purchase only one home for their own use, and freeing up foreign institutions to buy commercial property for their own use, but only in the city in which they are registered. Foreign companies whose core business is investment are not included in these rules.