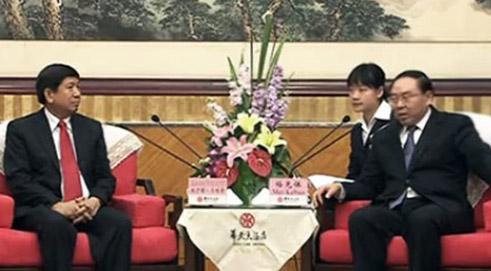 Mei Kebao, deputy secretary of the CPC Hunan Provincial Committee, met in Changsha with a Lao delegation of carders led by Vongvichit, vice minister of the Health Ministry of Laos, on the afternoon of April 1, 2011.

Mei extended sincere welcome to the guests. He said that in recent years, Hunan has enjoyed rapid and sound economic and social development since the province implemented the strategies of new-type industrialization, new urbanization, agricultural modernization, informatization and the construction of Two-oriented Society (a resource-conserving and environmentally-friendly society).

New-type industrialization has served as an engine for Hunan, a major province of traditional agriculture, to invigorate itself and enrich its people. In the new era, the two sides have kept in-depth exchanges and cooperation for long and shared complementary advantages in economy. He hoped that the delegation s tour in Hunan will contribute to enhancing cooperation in various sectors.

Vongvichit thanked Mei for his meeting. He hoped to have a better understanding of Hunan, learn experience from the province s development, and increase mutual cooperation via this tour.