Zhang Chunxian, secretary of CPC Xinjiang Committee has made inspection in Changji Hui Autonomous Prefecture. During the inspection from August 14th to 16th, he stressed that Changji should seize the opportunity and achieve leapfrog development from a new staring point.

In the two and a half day, Zhang Chunxian and his party visited Fukang city, Jimsar county, Qitai county, Mulei Kazak Autonomous county, Changji city and East Junggar Basin industrial belt. The prefecture is renowned as one of the four granaries in Xinjiang. Now it is the harvest season. Seeing that farmers in Tangfangmen village of Biliuhe Township, Qitai county were reaping wheat, Zhang Chunxian stopped the car and talked with farmer Zhang Zongming. The farmer said that he bought a harvester three years ago. Since then, he has harvested wheat for his fellow villagers every year. By doing this, he can earn more than 100,000 yuan a year. Zhang Chunxian felt very glad upon hearing that. He said, more such services are conducive to the modernization of agriculture and animal husbandry. He wishes everyone a better life.
At Xigebi village of Biliuhe township, Zhang Chunxian chatted with local residents of ethnic Hui and Han. The party secretary of the village Ma Guoliang happily told Zhang Chunxian that, every family in the village has eight to nine new rooms. This is owing to the preferential policies given by the Party in these years. Moreover, every family can earn 100,000 yuan, or 30,000 to 40,000 yuan at least relying on breeding, working in other places and developing tourism. After hearing that, Zhang Chunxian was gratified and said that now the key is to accelerate the development, only by doing so can people live a better life.

Changji prefecture has rich resources, which lay a favorable foundation for developing new type industrialization.
Zhang Chunxian emphasized during the inspection that, to explore Xinjiang's resources, we should take on the road of sustainable development for both resources and eco-environment. The prefecture should quicken its transformation from resource advantage to economic profit in the shortest possible time, thus benefiting Xinjiang people. He expressed that the region will give more support to innovative companies that stick to the principle of sustainable development and are quick in action.While talking with the prefectural leaders and the persons in charge of the counties and cities, Zhang Chunxian proposed three targets for the prefecture: it should take lead in Xinjiang in accomplishing new type industrialization, farming and herding modernization and new type urbanization. The prefecture should strive to be the first in making its farmers and herdsmen s per capita income reach more than 10,000 yuan in XJ. It should be the first one in the region to construct an all-round well-off society. 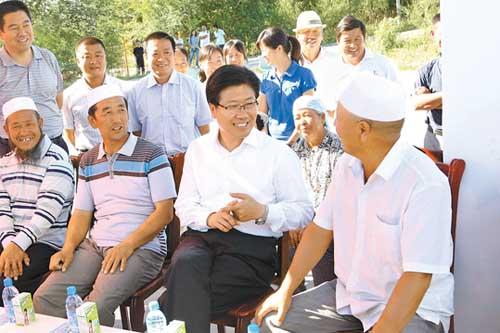