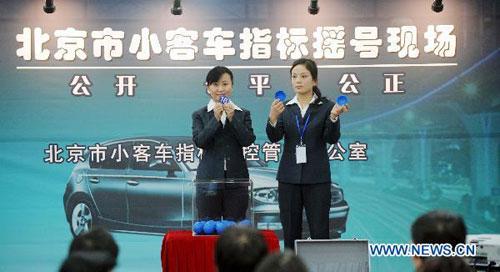 "It doesn't necessarily mean the whole year is going to be bad," he said. "And research we've done with insiders of the auto industry (showed) most actually feel a period to be optimistic about future growth, and actually used to performance like this."

China's car sales dropped slightly in February, the first fall in more than two years. This has given rise to uncertainty about this year's overall car sales.

According to the China Passenger Car Association, domestic sales of cars, sports utility vehicles, multipurpose vehicles and minivans dipped by 0.4 percent year-on-year to over 880,000 units in February, a 37 percent nosedive from the previous month's figure.

Benjamin Cavender, associate principal at China Market Research in Shanghai, said the low sales in February was partly due to the Chinese New Year holiday when people traveled and spent time with families and didn't make large purchases.

But, he revealed that new policies, including Beijing's quota on car buying and the end of favorable taxes on small-engine cars, did affect auto sales.

"There certainly has been an effect and with some consumers being aware some of these favorable taxes going away," said Cavender. "There was a lot buying prior to the repeal of the breaks, so we're seeing a slowdown after the fact. Beijing setting quotas is having an impact on the quota of sales."

The Beijing municipal government announced late last year that it plans to adopt a lottery system to issue non-transferable license plates, and only 240,000 new license plates will be issued for 2011, which is only one third of 2010's total.

Furthermore, China resumed levying a 10 percent purchase tax on vehicles with engine sizes of 1.6 liters or less beginning in 2011. The sales tax was halved from 10 to 5 percent in 2009 to combat the financial crisis and spur the use of clean and fuel-efficient cars. It was then raised to 7.5 percent in 2010. Boosted by tax incentives and other favorable policies, China's auto market grew rapidly in the past two years.

Although the new policies were considered to curb car sales, Cavender didn't think weak auto sales in February predict a downtrend for the entire year.

"It doesn't necessarily mean the whole year is going to be bad," he said. "And research we've done with insiders of the auto industry (showed) most actually feel a period to be optimistic about future growth, and actually used to performance like this."

On the other hand, new policies have driven many companies to transfer into car rental businesses as people who can't afford a car or fail to obtain a license may choose to rent a car. The market saw an overall business boom in car rentals during the Spring Festival period.

However, Cavender is still confident in private car sales as there are many Chinese still waiting to buy cars.

"The car market still is quite healthy," he said. "The rental market probably will grow, and probably we'll see the growth of corporate fleets with more and more companies and government offices buying automobiles, but personal cars are still going to be popular."

According to Beijing's new policies, private car buyers will receive 88 percent, or 17,600 plates per month on average, of the city's new license plates. Two percent will be for commercial use. The remaining 10 percent will go to companies and government institutions and others.