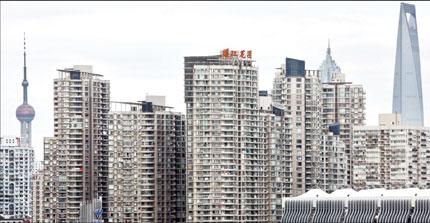 Residential buildings are seen near the Huangpu River in Shanghai. Sales of existing properties plunged more than 60 percent in Shanghai last month as buyers were put off by the latest government measure to ban home buying.[Photo: Shanghai Daily]

Sales of existing properties plunged more than 60 percent in Shanghai last month as buyers were put off by the latest government measure to ban home buying.

Jing'an, Luwan and Jiading districts saw the largest drops of more than 70 percent.

A total of 7,900 units of existing real estate, mainly homes, were sold across the city in February, a drop of 62 percent from January, according to a latest report released by Century 21 China Real Estate.

"The February data just proved that non-local buyers, particularly those from other parts of the country, as well as the high-end property market, were affected the most over the past month as a result of the government's latest ban on home purchases," said Eric Luo, a researcher at Century 21, which has over 300 offices in the city.

Non-local Chinese buyers of existing properties, for instance, accounted for 35 percent of the city's total in February, a drop of 6.5 percentage points from a month earlier, Century 21 statistics showed. During the same period, 59 percent of deals involving existing properties were secured by Shanghai buyers, versus 53.3 percent in January.

The central government in late January launched its toughest ever home-purchase curb to combat speculation. Local households who don't own more than one home as well as non-local families who have none but can prove their length of stay in the city for a cumulative 12 months over the past two years can purchase a home.

"The latest crackdown is very different from earlier government measures, most of which were designed to raise the costs of home buyers to curb speculation," said Song Huiyong, research director at Shanghai Centaline Property Consultants Ltd. "The latest policy has immediately disqualified many people, particularly wealthy buyers because most of them already own more than one house."

The latest Century 21 report said transaction volume of existing properties costing between 5 million and 10 million yuan (US$761,035 and US$1.52 million) dived 78 percent last month from January.