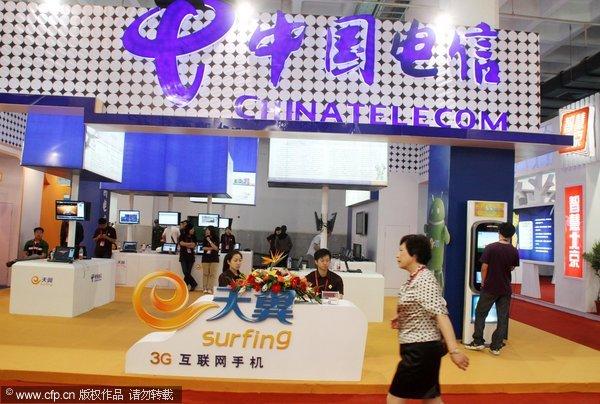 China Telecom may be the first mobile operater to sell iPhone 5 in China. [CFP]

China Telecom, China's second-largest mobile operator in terms of user numbers, will be the first mobile carrier to sell the iPhone 5 in China, the Beijing News reported Tuesday.

China Telecom stores said they have received a notice from the company's headquarters which instructed them to train their salespeople in preparation for selling the iPhone 5.

China Telecom will begin taking orders as early as late September, and products will hit the market in October, according to the notice.

China Telecom's introduction of the iPhone 5 will exert great pressure on its main rival China Unicom. China Unicom is the only mobile operator authorized to sell the iPhone 4 in China.

Last month, China Unicom's Vice President Li Gang, along with his assistants, went to the U.S. for talks with Apple Inc executives about the introduction of the iPhone 5. So far, there have been no announcements regarding the talks.

However, Apple itself has yet to make any announcement regarding the fifth generation of its popular smartphone.