Racing for pole position on the 'green' vehicle front

Racing for pole position on the 'green' vehicle front 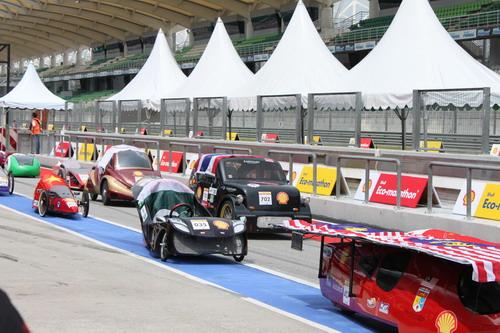 KUALA LUMPUR - Guo Shunhong, a 21-year-old from Beijing Institute of Technology, enjoyed making an energy-saving car over the past 14 months.

The futuristic, streamlined vehicle, which began life as a sketch on a piece of paper, maximizes fuel-efficiency, Guo and his co-workers said with pride.

In July, 94 student teams from 12 countries all over Asia hit the tracks of the Sepang International Circuit in Kuala Lumpur, Malaysia, where the Formula One race takes place. Like Guo, they were gearing up for an eco-marathon contest to see whose designs could travel the furthest distance using the least amount of fuel. The competition was eventually won by a team from Thailand and Guo's team came third.

The small event reflected a much larger picture. Countries across the globe have been seeking effective ways to reduce carbon dioxide through legislation and international binding protocols, notably in the automotive sector.

While the energy-saving car has quickly evolved from a concept to reality, farsighted companies have seen ways of turning many of the current environmental problems to their commercial advantage.

SKF Group, the world's top bearing maker by revenue, is one of them.

The company has been a supplier of all bearings to Ferrari Formula One since 1947. Enjoying 13 years of consecutive growth, the company's Asia operations have continued aggressive expansion in all their businesses, including the automobile sector. In 2010 they posted historically high revenue growth of 30 percent, with the automobile sector accounting for a continuously growing share of total sales.

By tapping into emerging markets that have a strong desire to go "green", the firm has expanded its footprint in key countries across Asia, and recently established one research and development center and three bearing factories in China. It has a total of 22 factories across Asia.

Rising temperatures can cause more severe droughts, increased precipitation and storms, all of which can have economic consequences. But SKF is dedicated to addressing the problems caused by such changes, said Rakesh Makhija, president of SKF Asia.

By providing energy-saving bearings to all youth teams and lending a hand in drafting engineering design, SKF not only creates a strong presence in the sector but, more importantly, educates the future stakeholders through indoctrinating energy-efficiency ideas in designing critical components in automobiles.

Despite the enormous strides in improving energy efficiency in passenger cars, as little as 15 to 20 percent of the fuel put into the tank gets used to move a car down the road or to power the vehicle's accessories. The rest is lost by engine and driveline inefficiency and idling, said Torsten Nordgren, director of SKF Automotive Division Asia.

As a result of optimized design and internal geometries, SKF's new series of energy efficient (E2) ball and roller bearings exhibit significantly less friction loss than conventional bearings of a similar type. Up to 30 percent friction reduction in the E2 bearing range applied in a car driveline will save up to 8 grams of carbon dioxide emission every kilometer, Nordgren said.

Another such example is replacing metal-to-metal camshaft bushings with roller bearings, an innovation first used in high-performance racing cars. Some studies show that crankshaft roller bearings can yield fuel savings of up to 5 to 6 percent, as a result both of less friction and the fact that only a small oil pump is required.

People often use the term "eco-friendly cars" but do not explain what plays an essential role in the energy-saving process, said Zhang Xinfeng, a professor at the clean-energy automotive engineering center at Shanghai-based Tongji University.

"Generally 30 to 40 bearings are needed in a car. Almost everything that is rotating in the car, like the gear-box transmission, normally has one or the other kind of bearing. The friction of the bearing will have a direct impact on the energy consumption," Zhang said.

"Our team preferred to use such (SKF's) bearings because computer simulations show we can achieve at least a 20 percent energy saving," said Guo from the racing team. "Besides, it makes the engine run more smoothly."

China has huge potential in the new energy car sector. The country will roll out a plan to make the energy-saving vehicle industry a leader over the next 10 years, with government funding of 100 billion yuan ($15.3 billion).

According to the draft plan, China is aiming for the top position in the global new-energy vehicle sector with sales volumes of 5 million units by 2020.

A recent report by the Ministry of Industry and Information Technology (MIIT) said that a total of 4.19 million energy-saving cars had been manufactured by the end of June, accounting for 42.45 percent of vehicles with engines smaller than 1.6 liters, up 35 percentage points year-on-year