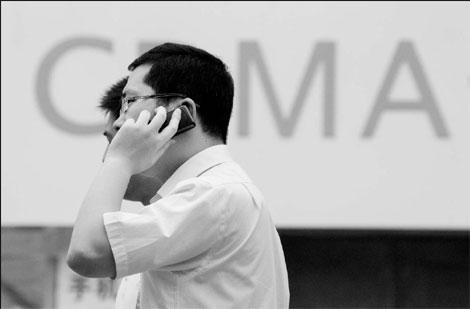 A man uses a cell phone in front of a CDMA billboard in Zhengzhou, Henan province. The 4G network will take off in 2012, and by 2015 the number of users is expected to rise to 300 million across 55 countries, according to Jaikishan Rajaraman, senior director of the GSM Association's Asia-Pacific branch. Ma Jian / For China Daily
China will be a main driver for the deployment of the fourth-generation (4G) mobile telephone network in the Asia-Pacific region, and the country will have almost half of the total 4G subscribers in the region by 2015, according to officials from the GSM Association.
There will be 126 million subscribers for the next generation Long Term Evolution (LTE) networks in the Asia-Pacific region by 2015, and China is expected to be home to about 58 million of them, said Jaikishan Rajaraman, senior director of the GSM Association's Asia-Pacific branch, told China Daily on Thursday.
The association, which was established in 1987, is the world's largest mobile operators body and represents nearly 800 of the world's carriers.
"We believe 2011 will be a tipping point for the LTE industry, as 24 countries are about to build up LTE networks by the end of this year," Rajaraman said. He estimated there will be 4 million LTE subscribers globally by then.
The 4G network will really take off in 2012, and by 2015, the number of users is expected to rise to 300 million across 55 countries, he added.
China Mobile Communication Corp, the parent of the Hong Kong-listed China Mobile Ltd, has made efforts to prepare for the rolling-out of 4G commercial services in China by adopting the homegrown TD-LTE (Time Division-Long Term Evolution) technology.
The world's largest mobile carrier by subscribers has been conducting trials of the TD-LTE network in seven Chinese cities since January.
"China Mobile is so big. It is the leader and has the ability to shape the TD-LTE eco-system," said Rajaraman. The economic scale it creates will help the devices and structures to be cost-effective, he added.
Other countries are likely to look into China Mobile's practice and also benefit from the economic scale it will create, according to Rajaraman.
A China Mobile internal document revealed that the company hopes TD-LTE technology will be used commercially on a global-scale by 2014.
Wang Jianzhou, China Mobile's chairman, said previously that TD-LTE technology has opened up a "global market" for the company
"The next important step for China Mobile is to converge TD-LTE technology with the other mainstream 4G technology - LTE FDD," said Zhou Jianming, general manager of China Mobile's technology department.
Zhou made the comment on Thursday at the 4G World China Conference in Beijing, and said China Mobile hopes consumers will be able to access both the TD-LTE network and the LTE FDD network with the same handset.
"Convergence will provide a much bigger platform for TD-LTE technology," Zhou said.
The China Mobile document disclosed that the company wants to deploy 40 TD-LTE trial networks and 10 commercial networks by the end of this year, with a further target of 60 trial networks and 20 commercial networks by 2012.
China Mobile has so far invested more than 140 billion yuan ($22 billion) in building the TD-SCDMA network and the TD-LTE trial network, according to Zhou.