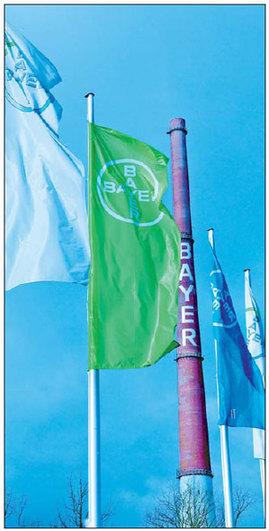 Bayer AG said it will invest in Chongqing as one of its five downstream businesses worth 110 million euros ($156.5 million). [Photo / Agencies] SHANGHAI - Bayer MaterialScience AG, an arm of the German pharmaceutical and chemical producer Bayer AG, outlined plans to invest more in China to strengthen its position in the world's largest single polycarbonates market.

On Wednesday, Bayer MaterialScience announced a package of plans to highlight its China strategy. These include expanding polycarbonates production in Shanghai, establishing the first color competence and design center in Chongqing (the third center of its kind in China), and moving its polycarbonates business' global headquarters from Leverkusen, Germany, to Shanghai in July.

Polycarbonates are plastics widely used in the electronics, automotive, consumer appliances and construction industries. For example, DVDs, MP3, the cases of digital audio players, such as Apple Inc's iPod and iPhone, and sunglasses can all be manufactured from polycarbonates.

Data from Bayer show that polycarbonates consumption maintains an annual growth rate of more than 6 percent in emerging economies such as China.

"China is a strategically important market for Bayer MaterialScience. Polycarbonates will promote our sustainable development, and we see significant possibilities in supporting China and its emphasis on energy efficiency, light-weight mobility, and durable construction," Rettig said.

Bayer MaterialScience plans to construct a polycarbonates facility in Shanghai to help the chemical company expand its production in Shanghai to 500,000 tons annually. The facility is part of a 1 billion euro ($1.43 billion) investment, which will be completed in 2016.

Meanwhile, Bayer said it will invest in Chongqing as one of its five downstream businesses worth 110 million euros. The new facility in the Chongqing Chemical Industry Park, to be completed in 2012, will extend Bayer's network to southwestern China, following its centers in Shanghai and Guangzhou.

"The IT, electronics, OEM (original equipment manufacturing) and modern manufacturing industries are moving their facilities away from coastal regions to the west. For our customers, particularly those in the electronics and IT manufacturing segments, producing a large variety of products with distinct colors, designs and customized features in small quantities, within a very short lead time, is crucial for their business success." Rettig said.

"IT is definitely important for us, but apart from that, in the western area, there are also trends for development of the automotive and appliances industries," Jou said. The polycarbonates business unit has every intention of following this trend to the west, she said.

In July, the global headquarters of the polycarbonates business unit will move from Leverkusen to Shanghai to speed up the process of strategic decision-making in this increasingly important market.