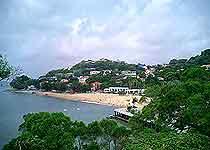 It is free to go to the island. Sunlight rock, garden of bean village, carving characters in the hall, 80 yuan of organ hall coupon ticket. Construct 60 yuan in the sea paradise.

The upper coastline of island of Gulang Island is winding, surround around the cloth in the thin natural bathing beach of peaceful sand of slope, there is sunlight rock in the main beauty spot, bean village garden, white monthly garden, Yu garden, way on the roundabout, sea paradise construct, piano museum, Zheng Chenggong memorial museum, sea floor world, natural bathing beach, drum wave stone etc.. The sunlight rock of highest peak is a symbol in Xiamen, it is equal to not getting to Xiamen to have the sunlight rock Saying.
Gulang Island belongs to the maritime monsoon climate of subtropical zone, more than 90 subjects and more than 4000 kinds of plants grow green and fresh throughout the year on the island, brightness of flowers and birdsongs, the air is fresh. The island is keeping a lot of buildings with various Chinese and foreign architectural styles intactly, there is Chinese traditional flying in the eaves and sticking up the temple of the angle, there is a courtyard one-storey house of the south of Fujian Province style, the Eight Diagrams building combining harmoniously while having, there are pretty and cleverly-made Japanese rooms that are given up, there is consulate of the former western countries of Continental Europe style in the 19th century too, there are the Wan s building fairs Its reputation.
From middle period of the 19th century, accompanied by the spread of Christianity, the western music begins to pour into Gulang Island, merge with the graceful human settlements environment minister of Gulang Island, has brought up today s music tradition of Gulang Island, train large quantities of remarkable musicians such as ShuAn, Lin JunQing, Yin ChengZong, Chen ZuoHuang, Xu Feiping Zhou. Nowadays, the intersection of per person and the piano of Gulang Island lead as first in China, there are more than 100 music old and well-known families at the island, Gulang Island was named as Chinese Musicians Association in 2002 island of music .
Poet Shu Ting can be rated as the current most famous residents of Gulang Island, Zeng someone labelled the address of her home in the tourist map many years ago, let she their disturb very, protest strongly, cancel just. Live at the Gulang Island one write down cause oak beautiful poet Shu Ting of poem, Gulang Island is full of more dim poesy.