Wang YiRong travels in the memorial museum Yantai of China

Wang YiRong travels in the memorial museum Yantai of China 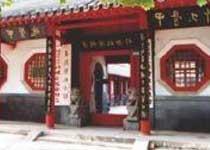 Take Bus No. 32 to No. of the north four of mountain area of good fortune from Yantai, 200 meters get to king s Yi honour memorial museum promptly eastwards

YiRong Wang, the intersection of word and straight child, Fushan of Yantai city people, come from Shi of fragrance of books government official house, and then pass the highest imperial examinations, once three let the Imperial College hold a memorial ceremony for the wine, administered Chinese education. 1899 year, he find inscriptions on bones or tortoise shells, textual criticism their for ancient characters first first. In 1900, the Eight Strategic Nerve Points invaded Beijing, it is broken to defeat in the city, Wang YiRong sent out my justice can t be grown carelessly Oath,lead whole family brave and noble-minded give one s life for one s country.
Wang YiRong is located in the centre of the street of urban town of Fushan memorial museum, it is viewing and admiring the famous scenic spot of the urban quite spot in a noisy neighborhood of Fushan, also provincial outstanding social educational base and Patriotism Education Base. Divide into 7 exhibition rooms in the memorial museum, has shown Wang YiRong s relic including personal letter, letter, work, calligraphy, slice of inscriptions on bones or tortoise shells etc. more than 300, vivid and full and accurate. Have also collected state leader, more than 200 treasures of fine piece of writing of famous historian, scholar, expert of calligraphy and painting of inscriptions on bones or tortoise shells outside China in the hall.