Brightly burning Olympic flame lights the passion of all the Chinese people. Two employees of CSR were honorably selected as Olympic torch bearers and participated in the world-focused Beijing Olympic torch relay in Jiangsu and Hunan provinces. 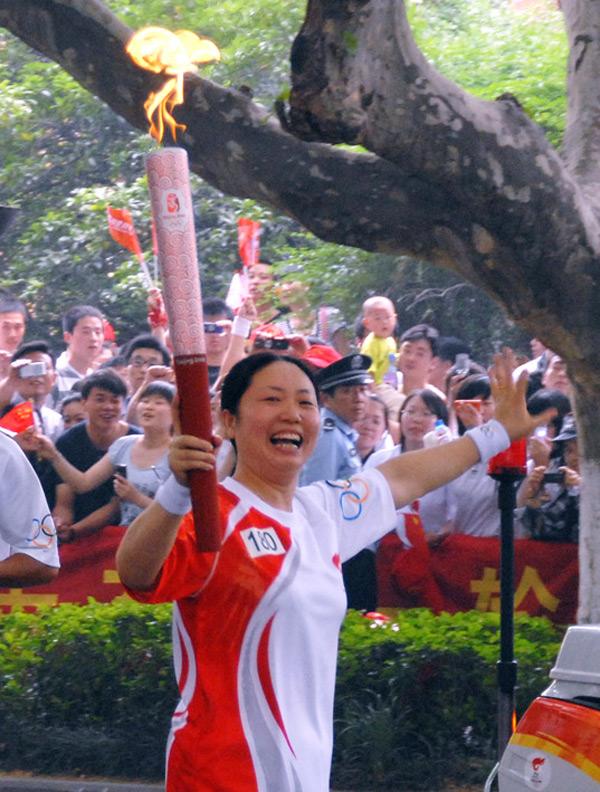 At 7:30am on May 27, Olympic torch relay kicked off formally with the theme of Love and Flame Go along together in the ancient capital Nanjing. Wu Shuxuan, delegate of the 17th National Congress of the Communist Party and Chief Staff of Qishuyan Locomotive Co.,Ltd. of CSR participated in the Olympic torch relay as one of the six native representatives from Changzhou.

The Olympic torch relay route in Nanjing, Jiangsu started from East Square of Nanjing Hexi Olympic Sports Center, passing along Riverside Boulevard, Caochangmen Avenue, Beijing West Road and finally arrived in downtown Gulou Park with a total distance of 12.9 kilometers. The torch passed through 208 torch bearers, who came from every walk of life, just like those in all other cities taking part in the Olympic torch relay. Apart from well-known master sportsmen and stars, there were also some ordinary workers working hard on their respective positions, and Wu Shuxuan is one of them. In accordance with the unified arrangements of the organizing committee, she ran at the 180th rod with a distance of 60 meters from Minsheng Bank to China Merchants Bank.

The Olympic torch relay route in Changsha, Hunan started from the lawn in front of Aiwan Pavilion of Yuelu Mountain which is one of the four famous pavilions in China, passing along the Statue of Mao Zedong, YueLu Academy, Mao Zedong Faculty of Arts, Xiangjiang River Scenic Belt, WuYi Square, Furong Square and other famous cultural attractions in Changsha, finally arrived in Helong Sports Center with a total distance of 20.8 kilometers and 208 torch bearers. Ding Rongjun ran at the 162nd rod along Xiangjiang Middle Road for about 100 meters.

No matter in Nanjing or in Changsha, the atmosphere of the Olympic torch relay was completely overwhelming. Everywhere was filled with shouting and cheering for China, Beijing Olympics and Sichuan. Five-star red flag and five-ring Olympic flag contrast finely with each other. Torch bearer Wu Shuxuan said in a telephone interview that she would always remember this day, because it is her glory and responsibility to participate in the Olympic torch relay.

Although she has completed the duty and mission as a torch bearer, as an ordinary worker, she would continue working hard on her position as the best support to the Beijing Olympics. And she would definitely bring her true feelings of participating in the Olympic torch relay today to other staff of the company and try her best to promote and support Beijing Olympics.