Soft drinks sales may fizz up as economy improves

Soft drinks sales may fizz up as economy improves 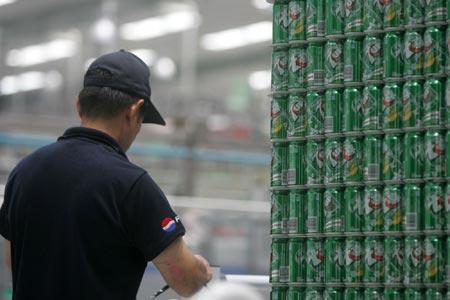 A Pepsi production line in Chongqing. China's soft-drinks output will continue to grow at more than 20 percent a year. [China Foto Press]

BEIJING - China's soft-drinks output will continue to grow at more than 20 percent a year, Xinhua News Agency said, underscoring the potential for companies such as Coca-Cola Co and PepsiCo.

China's growing number of wealthy is also driving changes in the nation's drinking habits, with more people switching to wine made from grapes rather than rice.

China is expected to be the world's seventh-largest consumer of wine by 2013, according to a report by Vinexpo this month. Chinese are projected to drink about 1.26 billion bottles of wine by then, almost a third more than last year, the organizer of wine shows said.

Mainland buyers won at least a quarter of the bids at a Sotheby's wine auction in Hong Kong in January, when a 6-liter bottle of Chateau Lafite 1982 fetched $46,700.

"Many Chinese buy to drink, entertain and impress," Kevin Ching, Sotheby's Asia chief executive, said at the time. "That is good, because it means that they would have to replenish their stock and buy more often," he said.

High-end spirits will also be a more obvious market trend in the next few years, Xinhua said, citing the report.