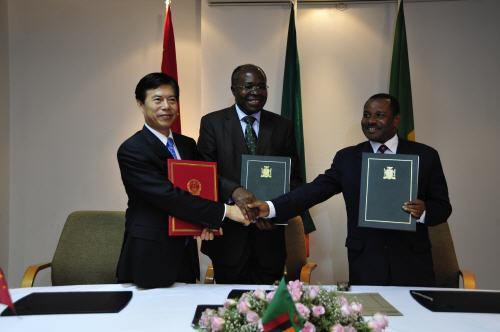 China has cancelled by half, Zambia and Tanzania s debt which was incurred during the construction of the Tanzania-Zambia Railways (TAZARA). Following the cancelation, Zambia and Tanzania will now have to pay US$ 75 million instead of the original debt of US$ 150 million.
The debt was incurred by the two countries back in 1970 during the construction of the railway line.
China signed the debt remission agreement with the two countries in Lusaka on the night of 19, January. Each of the two countries will now have to pay about US$37.5 million.
Finance Minister Situmbeko Musokotwane signed on behalf of the Zambian government while Tanzania s Deputy Minister of Finance Peraire Ame Siliara signed on behalf of his country.
China was represented by Vice Minister of Commerce Zhong Shan who led a delegation that attended the 109th China Import and Export Promotion Fair held in Lusaka on 19 January, 2011.
The Chinese Vice Minister and the Zambian and Tanzanian leaders held a meeting before signing the agreements.
Speaking after the signing ceremony, Zambia s Finance Minster and his Tanzanian counterpart praised China for remitting half the debt saying it is an indication of true friendship between China and African countries.
Dr. Musokotwane said the railway line helped Zambia to open up rural parts of the country and has been an important means for transporting copper.
He said apart from connecting the country to the port and exportation of copper, the railway still remains important to Zambia especially for the transportation of agricultural produce as the country has continued to records bumper harvests.
And Tanzanian Finance Deputy Minister Peraire Ame Siliara, said the Chinese government needs to be praised not only for the resources and financial contributions to the two countries but also for the lives of people that were lost during the construction of the railway.
TAZARA was built between 1970 and 1975 by Tanzania and Zambia mainly to give Zambia which is landlocked access to the port of Dar es Salaam in Tanzania as an alternative route to as other routes to Zimbabwe, South Africa and Mozambique became impassable.
At the same ceremony China Foreign Trade Centre and the Zambia Development Agency (ZDA) also signed a cooperation agreement.