Visiting Chinese Vice Premier Hui Liangyu called for further development on bilateral ties with Zambia in the new period on the basis of mutual benefits while meeting with Zambian President Rupiah Banda at the State House on Jan 10, 2011.
Hui commended the mutual respect and support, close cooperation and coordination in international affairs since the two countries established diplomatic relations 47 years ago, saying Sino-Zambian relations have been considered as a model of traditional friendship between China and African countries.
In recent years, exchanges of all ranks and departments between the two sides have been increasing tremendously while economic and trade cooperation between China and Zambia have entered a fast development page, Hui said, calling for joint efforts with Zambia to enlarge cooperation in the fields of agriculture, mining, trade and infrastructure construction with the aim to benefit people of the two nations.
For his part, Banda expressed appreciation for China's assistance and support to Zambia during the past period when the southern African country was fighting for independence as well as during the process of Zambia's domestic construction and development.
China has successfully tided over impact of global financial crisis over the past few years, and China has also helped many countries, including Zambia, to overcome difficulties during the period, Banda said, adding that these achievements have made China more influential in the world.
During the same day, the Chinese vice premier and the Zambian president attended a ceremony for foundation laying of Lusaka Stadium. Hui delivered a speech at the ceremony saying that the China-sponsored construction project is the realization of Sino- Zambian cooperation under the China-Africa Cooperation Forum while the Tanzania-Zambia Railway as a symbol of traditional friendship between China and Zambia.
Banda said in his speech during the ceremony that stadium is believed to promote cultural and sports development in Zambia.
Zambia is the second leg of Hui's five-African country tour which has taken him to Mauritius and will also take him to the Democratic Republic of Congo, Cameroon and Senegal. 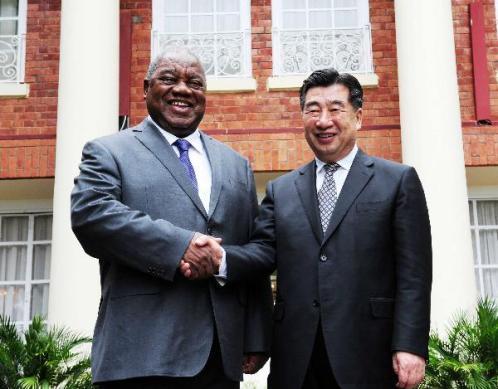