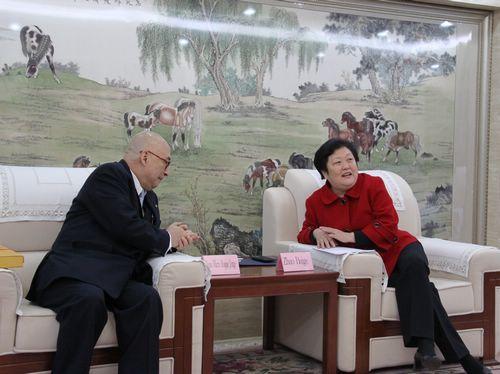 On the morning of 9 March 2011, Dr. Zhao Baige, Vice Minister of National Population and Family Planning Commission of China (NPFPC) had a cordial talk with Mr. Nuno Maria Roque Jorge, President of Organization of the Families of Asia and the Pacific (OFAP) and accompanying officials in Beijing.

Vice Minster Zhao Baige expressed her warm welcome to President Nuno Maria Roque Jorge, introduced the main thinking and practice of China in comprehensively addressing population issues and expressed the great significance the Chinese government had attached to the issue of family development. The hosts and guests also had exchanges on the mission, objectives, major concerns and development direction for the future of OFAP.

Mr. Nuno Maria Roque Jorge expressed his thanks to Vice Minister Zhao Baige for her warm welcome and said that China had many experiences in the field of population and family development that could be shared with other countries, especially the developing countries and OFAP was willing to have exchanges and discussions with NPFPC on issues related to family development. OFAP was established in Macau S.A.R., China in December 1999. It was a non-government organization and an active promoter and defender of the interests of the families in Asia and the Pacific Region, as well as in other parts of the world.