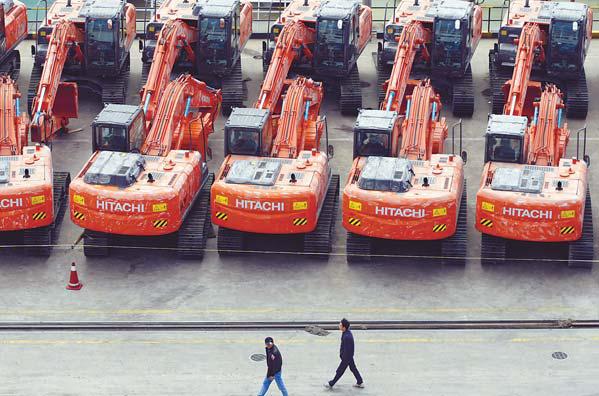 China-made cars for export at a port in Pudong district, Shanghai. Chinese auto exports to Brazil may be hit by a new tax increase from the Brazilian government.[China Daily]

Brazil's import substitution policy in the vehicle sector will put pressure on Chinese auto exports, but it will also help accelerate their decision to establish local manufacturing in order to gain a stable foothold in the world's fifth-biggest auto market.

In a move to replace imports with domestically made vehicles, Brazil's government said on Friday that taxes on imported cars and trucks and those that fail to meet localization rates of 65 percent will be raised by 30 percentage points.

The move, which will remain in effect until December 2012, will increase Brazil's industrial product tax on cars by between 7 and 25 percent, depending on engine size, to as much as 55 percent.

"It's clearly a blow to Chinese automakers' recently surging vehicle exports to Brazil," said Cui Dongshu, deputy secretary-general of the China Passenger Car Association. "The quickly launched measure also reflects the Brazilian government's awareness of and attention to the foray of made-in-China vehicles into the local market."

Hit by the slowdown in their domestic market and keen on global expansion, Chinese automakers have been building sales volume in emerging markets, focusing especially on Brazil.

According to Fenabrave, the Brazilian car dealers association, Chinese automakers now control 3.29 percent of the country's car sales, up from close to 0 percent in April 2010.

In the first eight months of this year, Chinese automakers sold more than 43,000 vehicles in Brazil, where 2.6 million passenger cars were sold last year.

The consultancy IHS Automotive forecasts that by 2015, passenger car sales in Brazil will have risen by 33 percent, and by 2020, passenger car sales are likely to have increased to more than 4.5 million units, offering more growth potential amid slowing growth rates in China.

Since last year, a number of Chinese automakers have begun taking advantage of the favorable trade agreements between Brazil and China, which became Brazil's largest trading partner in 2009. Brazil is being targeted because it is the largest market in the region and offers high-volume sales, combined with a large established auto-making industry and parts suppliers.

"Brazil's 'import substitution industrialization' is like a bid to develop its automobile industry by attracting foreign investment and technologies, not only products, by encouraging joint ventures with Chinese automakers," said Wang Zhile, director of the research center for transnational corporations under the Ministry of Commerce. "The market potential, and the Chinese companies' successful exports to Brazil, have produced a mature opportunity for domestic players to produce cars there."

Cui, of the China Passenger Car Association, said "the new taxation policy will push Chinese automakers to speed up efforts to establish production facilities in Brazil so they can avoid high taxes."

China's biggest auto exporter Chery Automobile Co Ltd was first, investing in a $400 million plant in Brazil in July. The facility will become operational by the end of 2013, initially with a capacity of 50,000 vehicle annually and eventually expanding to 150,000 to 170,000 units a year, depending on demand.

Earlier this year, the Chongqing-based Lifan Industry (Group) Co said that it will co-invest $100 million with Brazilian auto distributor Effa Motors to set up a factory to manufacture Lifan cars in Brazil, with capacity of about 10,000 units annually.

It also plans to plunge $70 million into establishing its first overseas research and development center in Brazil, making the country one of its strategic markets.

However, Wang said that although he thinks it's time for Chinese automakers to invest in local production in the Brazilian market, "they should think over their strategy to make it an important step toward realizing their global expansion ambition, not only paying attention to the short-term profit there".