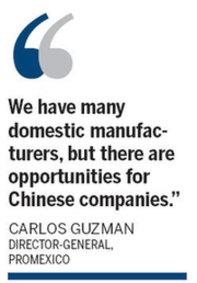 Mexico is trying to diversify its energy mix and exploit the potential of renewable energy sources, which means new opportunities for Chinese companies, said Carlos Guzman, the head of investment promotion authority ProMexico.

"Mexico has great potential for solar and wind power ... we have some domestic manufacturers, but there are opportunities for Chinese companies," Guzman said in an exclusive interview with China Daily.

Further, he said, products made in Mexico can be supplied to other Latin American countries.

Guzman was appointed by Mexican President Felipe Calderon in November as director-general of ProMexico, which seeks to attract foreign investment and promote Mexican exports.

Chinese companies' cumulative investment in Mexico was about $500 million in the past 10 years, which is relatively low, compared with the total of roughly $20 billion in foreign direct investment the country has attracted annually, he said.

Mexico recovered quickly from the global downturn, with the economy expanding 5.5 percent in 2010. Economic growth has maintained a fast pace in 2011, providing stability for investors, he said.

"There's great potential. As long as the products are competitive, the Mexican market is open," he said.

Chinese companies have already tapped the Mexican market, which can be a springboard to American markets as a member country of the North American Free Trade Agreement.

Chinese telecommunication equipment maker Huawei Technologies Co and computer provider Lenovo Group have invested in Mexico, and Guzman said they had performed "very successfully". They supply Mexico and other North American countries, including the United States.

Apart from renewable energy, and the electronic and vehicle industries, Guzman said Mexico is very open to participation in the mining industry.

"In Mexico, about 60 percent of the mineral production is from Mexican companies and 40 percent is from foreign companies, with 28 percent from Canadians. I think there are more opportunities to participate," he said.

Besides trying to attract Chinese investment, he also used his first official trip to China to promote tequila and other food and beverage products.

Bilateral trade was $24.7 billion in 2010 and China's trade surplus with Mexico was $11 billion, according to the Ministry of Commerce.

"We want to export more to China, but we are not very worried about the deficit because things that we import from China are mainly for manufactured exports to the US," he said.