Dishwashers to be the next big home appliance must-have?

Dishwashers to be the next big home appliance must-have?

Ding Ning, a 30-year-old new mom in Beijing, decided to spend a month's salary on a dishwasher after having her new baby.

"The dishwasher saved me a lot of time so I could have a little more energy to take care of my boy," said Ding.

Ding is not the only person to buy a dishwasher. Another Beijinger with the family name Wan, who was shopping at a Suning appliances store in the capital city, said he and his wife both work five days a week at a company, so a dishwasher is on their shopping list. "In addition, it can clean things much better," Wan said. 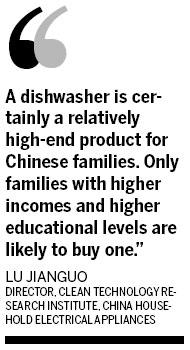 According to a report released by the Chinese Preventive Medicine Association, using a dishwasher is more hygienic than using a dish cloth, which has around 18,000 to 100 billion micro-organisms each on average in Beijing. The number for dish cloths in Shanghai is as high as 2,000 to 500 billion, thought to be because the city is more humid.

To echo the new needs of Chinese families, many home appliance makers have started to introduce more products into the surging market.

Germany-based Siemens launched its tailored dishwasher for Chinese families in August, with multiple functions such as washing, drying, disinfection and energy- and water-saving. The Siemens dishwasher has a specially designed Chinese dish basket and chopsticks stand that can clean Chinese tablewear more thoroughly.

LG Electronics will also unveil its new steam dishwasher, which delivers a powerful dishwashing performance and does not require pre-washing of dishes, saving time and keeping hands dry and clean. The dishwasher has easily adjustable tines that can accommodate a wide range of odd-sized dishes and utensils, providing enhanced flexibility and functionality.

"A dishwasher is certainly a relatively high-end product for Chinese families. Only families with higher incomes and higher educational levels are likely to buy one," said Lu Jianguo, a director with the Clean Technology Research Institute of China Household Electrical Appliances. Lu said the average monthly salary in Beijing is around 3,000 yuan ($469.8), and more families will consider buying the device if their income increases.

In June 2009, the Chinese government launched the old-for-new home appliance subsidy program in order to stimulate domestic consumption. Under the program, consumers selling their old appliances to recycling companies are eligible for a 10 percent discount on the purchase of new ones. The subsidy plan was available firstly for home appliance buyers in nine Chinese cities and provinces, and then expanded to 28 cities and provinces in June last year.

According to the Ministry of Commerce (MOC), the program has stimulated 152.12 billion yuan in home appliance sales, with televisions and air conditioners the most popular products. The sales volume of new home appliances under the government subsidy scheme reached 40.27 million units while 41.72 million units were traded in to be recycled.

The MOC statement said that TV sets and air conditioners are the most popular appliances, accounting for 35.6 percent and 21.9 percent respectively of the total sales volume, followed by computers, refrigerators and washing machines.