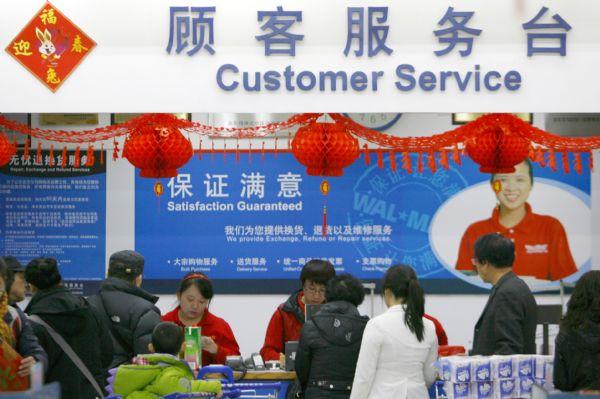 Customers wait at the customer service desk at a Wal-Mart Store in Beijing, capital of China, Jan. 27, 2011. [Photo/Xinhua]

The global retail giant Wal-Mart said on Wednesday that consumers who bought ordinary pork sold as higher-quality pork will get double their money back.

"Wal-Mart's unalterable responsibility is to safeguard consumers' interests. The relevant people in this case will be seriously dealt with, and we will further enhance our staff training and food management processes," the company said in a statement sent to the media.

Since the beginning of this year, more than 1,000 kilograms of ordinary pork were sold as green pork, which is manufactured in line with rigorous production standards and sold at a higher price, at three of Wal-Mart's outlets in Chongqing, according to the municipal market watchdog.

Law enforcement officials from Chongqing's industrial and commercial bureau raided eight Wal-Mart branches in the city on Aug 25, after receiving tip-offs from consumers, and found three of the stores were selling ordinary pork as green pork. The falsely labeled pork did not contain the official green stamps.

The officials also found the amount of "green pork" that had been sold and was for sale was more than the purchase volume after checking with the green pork supplier.

The company said in response that it will establish a daily inspection mechanism of green and ordinary pork, strengthen checks of purchase and sales volumes, and separate the two types of pork in the whole process from supplier to sales.

Another US company, Nike, was also facing criticism after Wang Hai, the manager of a consultancy company in Beijing known for his fight against counterfeit products, said he bought a pair of basketball shoes that were not the model claimed.

"There is only one air cushion at the heel. However, the model sold in the United States with that name has two air cushions," Wang said.

A man from Nike's service hotline said the company had activated an investigation process, and is cooperating with the industrial and commercial department.

"We will inform the public of the results and get in touch with the consumers who complained," said the man surnamed Jiang.

But Wang is not satisfied with the company's response.

"Nike deleted the description of the two air cushions on Wednesday, which showed they realized they were cheating Chinese consumers with false advertising," Wang said. "They are just prevaricating instead of apologizing or compensating consumers."

Consumer-rights experts said the incidents unmasked problems in the attitude of some foreign enterprises.

"Some businesses change their business model and integrity in China. But consumers everywhere should be treated the same," said Qiu Baochang, head of the lawyers group of the China Consumers' Association.

"Instead of arrogance, big brands should cherish their fame and consumers' trust," said Yi Shenghua, a lawyer at Beijing Ying Ke Law Firm.

Experts also warn that consumers should be rational about foreign brands.