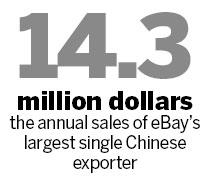 Lee spoke at the unveiling of The Asian Exporters' Index, a survey of large eBay exporters, defined as those with an annual turnover exceeding $100,000.

The survey also found that 65 of eBay's Chinese exporters had an annual sales exceeding $1 million, with the largest hitting annual sales of $14.3 million.

The largest five categories in which Chinese exporters sell on eBay are computers, clothing and accessories, jewelry and watches, cell phones and consumer electronics.

Computers are the top-selling items for Chinese exporters trading on eBay.

These exporters in China employ 11 employees on average, most of whom work full-time, and 73 percent of sales revenues come from eBay transactions. Most of the exporters intend to recruit an average of eight new staff members within the next year.

To improve the shipping process, eBay in August 2010 launched the ePacket service, which connects China Post with the US Postal Service. It also opened a Shanghai-based customer service center to help sellers adapt to the eBay system.

"Now it takes only seven to 10 days for Chinese products sold through eBay to reach any destination in the US," said Jeff Liao, chief executive officer of eBay Greater China.

As of end-2010, international transactions made up 20 percent of the total at eBay. Globally, most of the buyers are in the United States and Europe.

In 2010, the total value of goods sold on California-based eBay reached US$61.7 billion globally. The figure was $14.7 billion in the second quarter of this year.