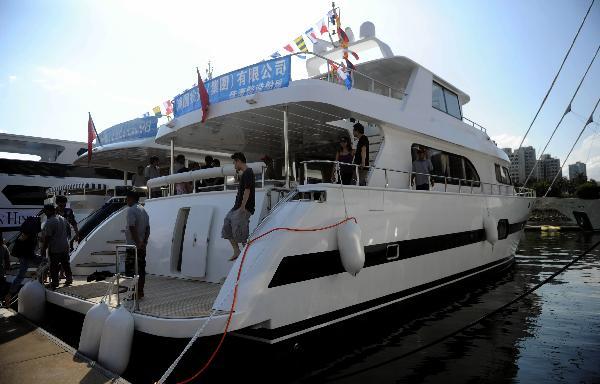 
China's yacht market is small at present, but it will grow bigger in the coming years, industry insiders said.

"The yachting market in China is emerging and exciting," Thierry Regnault, technical manager of France-based CMN shipyard, told China Daily at the Monaco Yacht Show, which runs from Wednesday to Saturday.

Regnault said that his company will attend the yacht show in Hainan next year to attract Chinese buyers, although CMN has yet to sell any yachts to China.

More than 500 exhibitors from 36 countries and regions across the world joined the annual show, which is the world's leading event in the super-yachting industry.

According to local media, more than 100 super yachts are on show, including 40 debuts. Around 30,000 visitors are expected to attend.

Yachting, a major pastime of affluent Americans and Europeans, is increasingly becoming popular among the rich in China as a show of wealth.

Demand for private yachts has gained traction in China over the past two years. According to the 2010 Hurun Wealth Report, there are at least 875,000 millionaires on the Chinese mainland, and half have indicated they intend to purchase a private yacht.

China makes up a small part of the global yacht market currently, but "I believe that China has the huge potential for growth, even the fastest growth in the world", British yacht designer Alex McDiarmid also said.

He said that yacht magazines in China are on the rise, adding that his company has created special yacht designs for the Chinese market.

China's yacht producers also want to have a slice of the pie. Roger Liang, managing director of Hong Kong-based Kingship Marine Ltd, which owns a shipyard in Zhongshan, Guangdong province, hopes to attract buyers from the Chinese mainland in the future.

Liang is confident in his steel and aluminum luxury yachts, which currently are sold to overseas customers.

However, not all of China's yacht builders are developed enough for mainstream sales. According to the 2010-2012 China Yachting Industry Report, the yacht manufacturing industry is still in the initial stages of development.

There were less than 400 domestic boat manufacturers at the beginning of 2010, of which 75 enterprises were mainly engaged in the manufacturing of yachts and approximately 40 enterprises realized annual sales of more than 10 million yuan ($1.56 million).

In addition, from yacht design to manufacturing technology, Chinese enterprises have long relied on resources provided by European and American enterprises, the report said.