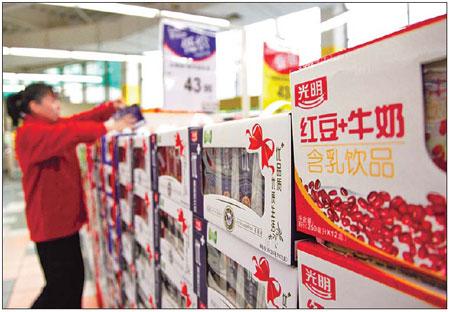 China's Bright Food Group Co's acquisition of Manassen Foods has won approval from Australia, a senior executive of the Chinese company said Tuesday, adding that it will scout for more takeover opportunities Down Under to boost its global portfolio.

"We are in discussion with certain wine producers for acquisition," said Ge Junjie, vice president of Bright Food Group Co, without giving details.

"Australia and New Zealand are key areas we will focus on as we expand globally in the future because they meet our strategy for developing the food industry," he added.

Last month, Bright Food announced that affiliate Shanghai Sugar, Cigarette and Wine Group (SSCW) would buy 75 percent of Manassen Foods, an Australian biscuit, fruit and dairy producer, in a deal valued at about A$530 million (US$556 million). The transaction makes it the biggest overseas acquisition by Bright Food after it missed several takeover targets.

Ge said he is confident the Chinese government will approve the deal in two months.

"We plan to introduce Manassen's products in China at a food fair this year and our product portfolio would also enter the Australian market later," Ge added.

Bright Food set its sights at the growing food, dairy and wine industry overseas. Ge earlier said Bright Food wanted to boost its overseas sales by as much as 30 percent within five years.

Last year, SSCW's 900 million yuan (US$141 million) profit was made on revenue of 44.8 billion yuan. The firm aims to double sales revenue to 80 billion yuan over the next five years and boost profit to 2 billion yuan.