IKEA clamps down on klatch

IKEA clamps down on klatch

What started out as a "match-making corner" with free hot coffee at IKEA has gone cold.

So many people have been gathering at the Swedish furniture giant's store in Shanghai that the retailer has had to set up a separate area for those who come just for free java and a chat. 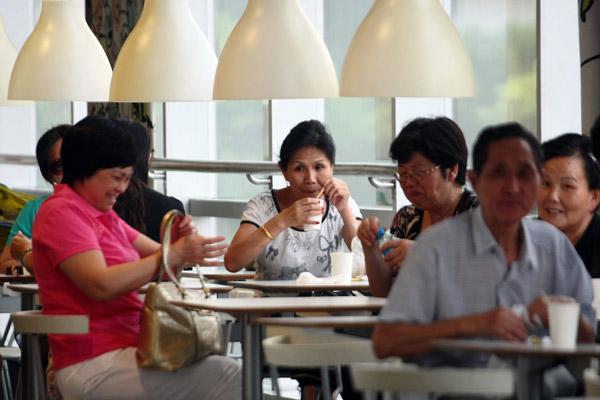 Free coffee and conversation at IKEA has made the furniture retailer in Shanghai a hangout for people looking to make new friends. [Photo/China Daily]

"It's sheer discrimination against us to separate us from the other customers," said a 65-year-old man who refused to be named.

He did confess, though, that the aim of his regular IKEA visit is not for shopping, but making friends.

"I never buy anything here, because things are too expensive," he said.

A group of mid-aged and elderly people - sometimes as many as over 500 - gather every Tuesday and Thursday afternoon in the restaurant where they can enjoy free coffee with an IKEA membership, which can be easily obtained with their identification cards.

According to the participants, the so-called "match-making corner" has existed for at least two years.

IKEA posted a notice in the restaurant two weeks ago saying that the group has caused trouble for the operation of the restaurant.

According to the notice, the group occupies seats for a long time, preventing other customers from sitting down. They also talk loudly and sometimes quarrel or fight, which disturbs the other customers.

"If you are a member of the group, we hope you won't come to the restaurant again for matchmaking," the notice said.

Zhao Jiaoli, secretary-general of the Shanghai Association of Consumers' Rights and Interests Protection, said that IKEA should not be blamed for dissuading the group.

"The free coffee policy is a benefit that IKEA offers to its customers," she said. "So the fact that they posted the notice or set up a separate area for free coffee drinkers hasn't infringed on the customers' rights," she said.

In an announcement provided to China Daily, IKEA said that their action aims to "guarantee the right of every consumer in IKEA and make sure they can have a comfortable environment to shop and have meals".

"We have specially arranged seven security guards to look after the area on Tuesday and Thursday," said Liang Pei, a security guard at the restaurant.

Liang said that they were just asking the people who stayed there but didn't buy any food to give up their seats to other customers.

But free coffee drinkers have their own reason to love the IKEA canteen because the city has few affordable places for middle-aged people to date and make friends.

"People here are not well paid. We can't afford those expensive clubs and the parks don't have air-conditioning. So this corner has become our favorite venue," said Zhang Jun, 50. Zhang met a lady in IKEA and they have been dating for several months.

"The store opened such an area for free, we can't expect too much. But we do hope the city will open more senior centers. If so, we won't always gather here," Zhang said.