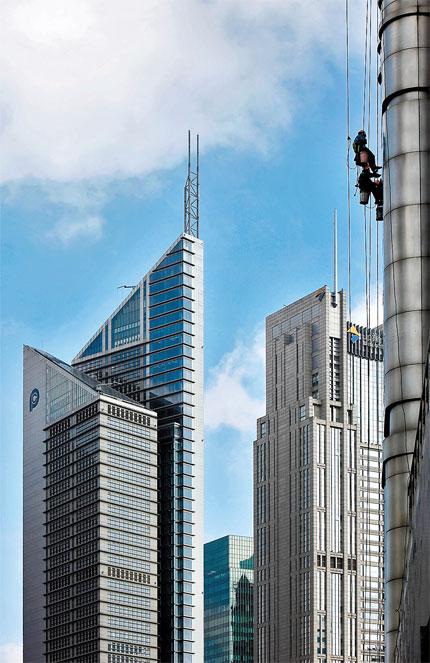 Workers clean the side of a building in the Lujiazui area in Shanghai. The city has the most expensive prime office rents on China's mainland and is the 11th-most costly in the Asia-Pacific region, an industry report showed yesterday.


Shanghai has the most expensive prime office rents on China's mainland and is the 11th-most costly in the Asia-Pacific region, according to a report released yesterday by a major international property services provider.

The city's average prime office rents rose 2.7 percent from the first quarter to 7.8 yuan per square meter, or an equivalent of US$41 per square foot per year, in the second quarter of this year, Colliers International said yesterday.

The rise was mainly fuelled by strong fundamentals of the local economy as well as robust demand triggered by the inflow of foreign direct investment in the service industry, Colliers said.

"Despite the huge supply coming out this year, we still look forward to stable office rents in Shanghai for the rest of the year, primarily driven by continued firm demand and inflation," said Lina Wong, managing director of Colliers' East and Southwest China operations.

Meanwhile, retail real estate landlords in the region also benefitted from higher rents in the first half of this year, boosted by consumer consumption and expansion of international and domestic retailers, said a separate report released yesterday by Cushman & Wakefield, a real estate services consultant.