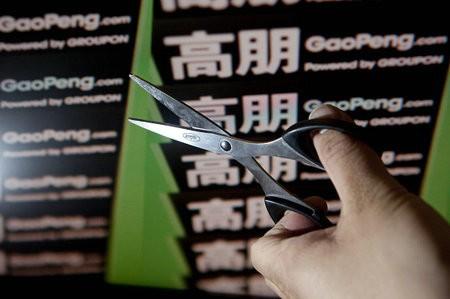 Gaopeng.com, the joint venture between Groupon and Tencent Holdings Ltd, China's largest Internet company by sales, started to close offices and reduce its workforce on Aug 18.


The group-buying business in China has reached a turning point and massive reshuffles are due after the Chinese joint venture of Groupon Inc started to lay off people, industry sources said.

Gaopeng.com, the joint venture between Groupon and Tencent Holdings Ltd, China's largest Internet company by sales, started to close offices and reduce its workforce on Aug 18.

But senior executives declined to confirm the reports and stressed the Beijing headquarters was conducting business as usual. Ouyang Yun, chief operating officer of Gaopeng, said at the China Internet Conference in Beijing on Tuesday that the company was "consolidating" branch offices scattered around different cities and experiencing a normal scale of personnel reshuffle.

"Tencent will play a greater role in managing Gaopeng and boost investment in the company from the Beijing headquarters," Ouyang said.

Hu Yanping, general manager of the Beijing-based research company Data Center of China Internet, said the cuts sounded an alarm to the industry and the group buying websites must focus on the fundamentals of the business, instead of irrational expansion.

However, he believed there could be survivors as long as they had different strengths.

Feng Xiaohai, CEO of Manzuo.com, which raised $50 million from Kleiner Perkins Caufield & Byers and JP Morgan in June, said on Wednesday that there have been many bubbles in the group-buying market in China and irrational expansion.

"As far as I know, many group-buying websites are laying off as well. The reason Gaopeng got so much attention may be that it just laid off more people than others," he said. Manzuo has a presence in 60 cities with about 1,500 employees.

He said that he believed an industry reshuffle was well under way and only five national operators will be able to survive.

Xu Maodong, CEO of another group-buying website 55tuan.com, also believed that only three to five major group-buying sites could survive the competition in the next three years.

Yang Guoqiang, special assistant to the chairman of 55tuan.com, said the company is "trimming" its workforce, but it was based on staff performances.

Wu Bo, the CEO of Lashou.com, said it will become more difficult for group-buying websites to raise funds. "If you want to set up another group buying platform, no investors will be interested." He said Lashou.com needs at least two years to achieve profitability.

Wu said his company still has enough capital for the next six to 12 months.

With the ambitious goal of becoming the most visited group-buying site, Gaopeng vowed to dominate China's flourishing group-buying market following its launch in February.

Backed by seasoned Internet players and other venture capital sources, Gaopeng should not be running low on cash. But the war to become the "Groupon of China" has become an expensive arms race, turning Gaopeng's enviable cash flow model inside out, said Chen Shousong, an analyst from Analysys International.

Ace, 28, was among the some 200 employees who were let go by the company's Shanghai operation. He did not want to reveal his full name. He said his department was the first to be informed and he was also the first in the department to go.

"They informed me of the termination instead of discussing anything with me. They had every document prepared and formatted my work laptop in 10 minutes," he told China Daily.

The drastic layoff plan has affected people mostly from the operating and administration divisions.

Over the weekend, Ace and other dismissed fellow workers urged employees in Shanghai to dress in black to protest the sudden job cuts on Monday. "After group negotiation, we were given two months' severance pay. I think it is acceptable," Ace said.

The group-buying business arena is crowded with an estimated 3,000 companies that have sprung up in about one year. Among them, a dozen strong national competitors are throwing tens of millions of dollars into advertising, recruitment and low-priced offers of deals.