BEIJING: Air France-KLM Group, Europe's largest airline, will start flying nonstop between Amsterdam and Hangzhou from May 8, making it the first European carrier to launch a new route to China after the global economic crisis struck a devastating blow to the industry since late 2008.

The new service, to be operated three times a week, reflects a steady improvement in international routes from the precipitous fall in demand that characterized the early part of 2009, analysts said.

KLM will fly the route with the Boeing 777-200 ER, which can carry 318 passengers, Air France-KLM said on Monday. The two airlines officially merged in 2004 by forming a holding company, but maintained their distinct identities. 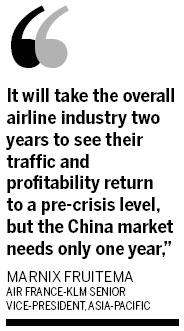 The Franco-Dutch airline group will be the first carrier to offer direct service between Europe and Hangzhou, capital city of East China's Zhejiang province, one of the country's wealthiest provinces.

Hangzhou will become the airline group's fifth destination on the Chinese mainland, after Beijing, Shanghai, Guangzhou and Chengdu.

"International air routes to and from China started to show improvement in terms of volume since the second half of last year. After experiencing a plunge in passenger demand in 2008 and 2009, airlines are expected to see traffic return to the pre-crisis level this year," said Li Lei, an aviation analyst with Citic China Securities.

Chinese mainland airlines carried 1.49 million passengers on international routes in February, surging 40.4 percent year-on-year and up 9.1 percent on a monthly basis, according to figures from the Civil Aviation Administration of China (CAAC).

It will take the overall airline industry two years to see their traffic and profitability return to a pre-crisis level, but "the China market needs only one year", said Marnix Fruitema, Air France-KLM senior vice-president, Asia -Pacific.

China reported a stronger-than-expected 45.7 percent year-on-year growth in exports in February, compared with 21 percent growth in January, thanks partly to a much lower comparable base in 2008, but more importantly due to increasing demand from Europe and the United States.

The International Air Transport Association (IATA) recently halved its loss forecast for 2010 to US$2.8 billion.

The improvement was largely driven by a much stronger recovery in demand seen by year-end gains that continued into the first months of 2010, IATA said.

"We are seeing a definite two-speed industry. Asia and Latin America are driving the recovery. The weakest international markets are North Atlantic and intra-Europe which have continuously contracted since mid-2008," said Giovanni Bisignani, IATA's director-general and CEO.

Boeing said on Monday that it would accelerate planned production rate increases on both the B777 and 747 programs to support increasing customer demand in the recovering sector.

The US aircraft manufacturer plans to increase monthly production of the B777 from five to seven in mid-2011, six months earlier than its original plan.

Its European rival Airbus said on March 9 that it will increase the monthly production rate of the A320 from 34 to 36, starting in December this year, as leading economic and business confidence indicators continue to demonstrate an upward trend.