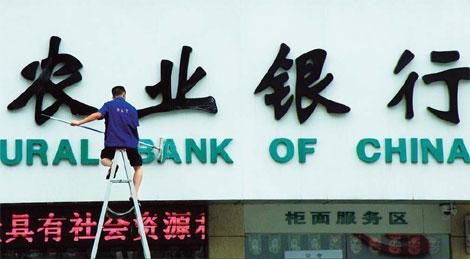 A man cleans a sign at an Agricultural Bank of China branch in Beijing. [China Daily]

Agricultural Bank of China (ABC) said on Monday that it will continue to give out loans to property developers and is likely to post a better-than-expected full-year net profit, thanks to the robust growth of its rural business and lower credit costs.

"We have no intention to stop lending to real estate developers, but suspended such loans for one week between Aug 25 and 31 to prevent from a month-end lending boom," Zhang Yun, president of ABC, told reporters in Beijing, adding the lender will resume property loans starting Sept 1.

"The bank has seen its property loans growing rapidly in the first half. Risk is controllable as the loans were advanced strictly in accordance with the regulatory requirements," Zhang said.

The bank's total balance of mortgage loans and loans in the property market stood at 1.18 trillion yuan ($173 billion) by the end of June, the lowest among the country's "Big Four" lenders, Zhang said.

The Beijing-based lender, which raised a world record 22.1 trillion yuan in an initial public offering in July, said on Friday that its net profit surged 40.2 percent year-on-year to 45.84 billion yuan in the first half, the best ever six-month result for ABC.

Buoyed by rising interest margin and a bigger market share in the country's fast-growing central and western regions, ABC Chairman Xiang Junbo is optimistic that the bank is likely to surpass its full-year target. Already, its first-half net profit accounted for 55.3 percent of the bank's forecast annual net profit for 2010.

"I expect the interest spread to rise steadily for the second half, and there is not much pressure for the bank to further lift its provision coverage for bad loans this year," he said.

The bank's interest spread in rural areas stood at 4.26 percent in the first half, up from 4.05 percent for the same period last year. That is higher than the bank's overall average of 3.88 percent in interest margin for the first six months of 2010, ABC Vice-President Zhu Hongbo said.