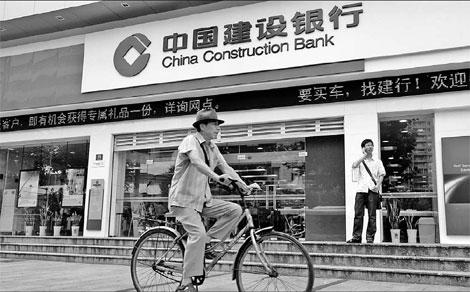 A man cycles past a branch of China Construction Bank Corp in Shanghai. [China Daily via agencies]

The chairman of China Construction Bank (CCB) said on Monday that the default risk for local government-backed financing vehicles is low as most loans are backed by collateral and ample bad loan provisions are already in place.

"The bank has 580 billion yuan ($85.28 billion) in outstanding loans to local government-backed financing vehicles as of the end of June, with a non-performing loan ratio standing at barely 0.11 percent," Guo Shuqing, chairman of China Construction Bank, the world's second-largest lender by market value, said upon release of the bank's first half results.

Guo's remarks came amid mounting market concerns that Chinese lenders might face serious default risks in the coming years after a lending spree last year under the country's massive stimulus package during the global financial crisis.

A top banking regulator has asked banks to conduct a thorough assessment of their exposure to local government debts and make sure such loans have qualified collateral or a second source of payment.

Guo said the bank has reined in its lending to the real estate sector in order to ward off potential risks following government tightening measures on the property market. "Property loans grew at 5.6 percent in the first half of this year, which is a very slow pace compared to the average level over the past five years," he said.

Since April, China has begun taking action including raising the down payment ratio and curbing lending to developers to clamp down on property speculation. Yet those moves have triggered worries of a possible flood of non-performing loans being let loose due to a major correction in the property sector.

To head off potential risks, the China Banking Regulatory Commission instructed lenders last month to conduct stress tests under worst-case scenario circumstances, where property prices in key cities slide by as much as 60 percent.

Guo said the bank has undergone the required tests, but the regulator will not allow the bank to reveal the result of those tests independently. An earlier report citing unnamed sources said the bank, China's biggest lender to homebuyers, would only suffer a significant increase in defaults if property prices tumbled by as much as 63 percent.

The Beijing-based lender made a net profit of 70.78 billion yuan in the first half of this year, up 26.75 percent from a year ago, as economic expansion boosted demand for loans and other financial services.

Guo said he expects China Construction Bank to raise 75 billion yuan through a share placement in Shanghai and Hong Kong this year, although it still needs approval from securities regulators.

The lender has seen its capital adequacy ratio - a key measure of a banks' financial strength - drop to 11.68 percent as of June 30 - just barely above the 11.5 percent minimum regulatory requirement for listed state lenders.

"We plan to maintain our capital adequacy ratio above 11.5 percent for the next three years," Guo said, adding the bank is planning to issue subordinate bonds in the future.