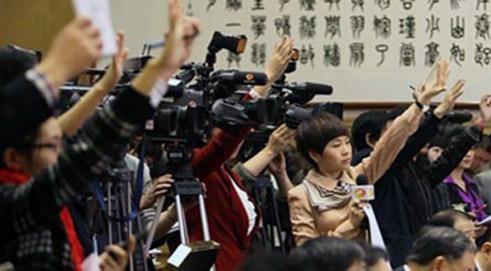 Journalists at home and abroad compete to raise questions.

The essence of Hunan s strategy of new-type industrialization, agricultural modernization, informatization and the building of a resource-conserving and environment-friendly society in an all-round way is to adhere to scientific development, said Mr. Xu, and the key lies in the transformation of economic development mode, the adjustment of economic structure, and the realization of green and sustainable development.

He further stated that its assessment index has come out, which calls for resource conservation, decrease of energy and material consumption and the balance between development speed and efficiency.

Special efforts will be exerted to address the environmental problems in key industries and major regions. Efforts will also be made to promote pollution control through construction of Changsha-Zhuzhou-Xiangtan pilot area.

He promised to make plan for rural construction and bring it to the overall plan of town and township construction. He pledged to allocate resources between rural and urban areas in a reasonable way, promote coordinated development, extend urban infrastructure to rural areas and provide equal access to public services among rural and urban citizens. And therefore, the long-term mechanism of urban and rural integration and complementary development could be established to diversify farmers sources of income and increase their income in a sustained way.