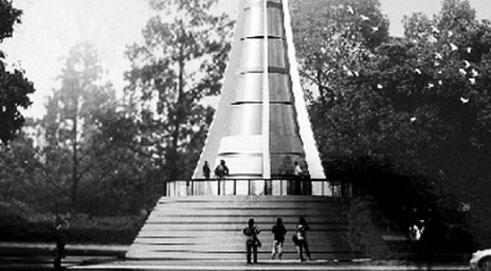 A new ecological park has been built in north Changsha. A few days ago the first-phase project of Xiufeng Mountain Park was completed and opened to the public for free. A principal from the Management Committee of the Jinxia Economic Development Zone said that a view tower is to be built in the park to embody the development of north Changsha.

According to the overall layout, the park consists of one core, five functional zones and eight scenic spots. The five functional areas are the area for cultural activities, the ecological forest zone, the entertainment zone, the recreational zone for children and the park affairs management zone.

The Jinxia beacon is designed like a golden champion trophy. The sculpture is 29.28-meter high, made up of such three parts as the pedestal, the body and the logo. The cone-shaped pedestal has a diameter of 12.9m at the bottom, and 8.6m at the top, transmitting glaring light at night.