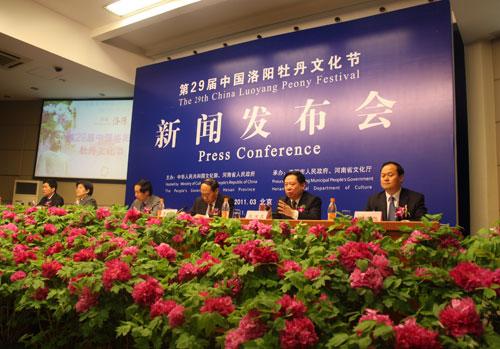 A press conference for the 29th Luoyang Peony Festival is held in Beijing on Tuesday, March 22, 2011. [Photo: CRIENGLISH.com/Zhang Xu]

The first state-level Luoyang peony festival, from April 1st to May 10th, will be held not only in the famous ancient city of Luoyang in central China's Henan province, but also in Beijing and Shanghai, according to a press conference held in Beijing on Tuesday.

Starting this year, the annual Luoyang peony festival which has been held by the Luoyang government for 28 years will be jointly sponsored by the Ministry of Culture and the Henan provincial government. During this year's China Luoyang peony festival, 25 events on trade, culture, sports and tourism will be held.
Meanwhile, citizens in Beijing and Shanghai can also enjoy the peony, which in China is known as the flower of riches and honor, at the Fangshan Peony Garden and Shanghai Botanical Garden.

Liu Yuzhu, head of the Department of Cultural Industries under the Ministry of Culture, hopes that the peony festival will have widespread influence in the international arena.

"In the future, the festival will go nationwide. Besides peonies, exhibitions of world-renowned flowers will also be held in Luoyang. Moreover flower-related events involving cultural industries will appear at the festival and we will invite influential international celebrities," Liu said during the press conference.

Guo Hongchang, mayor of Luoyang city, vowed to build Luoyang as an international tourist destination using the state-level festival.
Guo believes cultural competition is the most important among competition between cities. According to Guo, Luoyang abounds in cultural resources because it was the capital of 13 ancient dynasties during its 4000-year history. In recent years, there have been more than 10 million visitors during the annual peony festival; and thanks to the festival the number of visitors to Luoyang has reached over 60 million a year, the same number as in such renowned Chinese cities as Hangzhou.

"In order to build Luoyang as an international tourist destination, Luoyang will add more cultural elements to the festival and take measures to improve the quality of tourism with the construction of infrastructure facilities, transport, hotels, shopping and entertainment; as well as improve the quality of life, " Guo said.