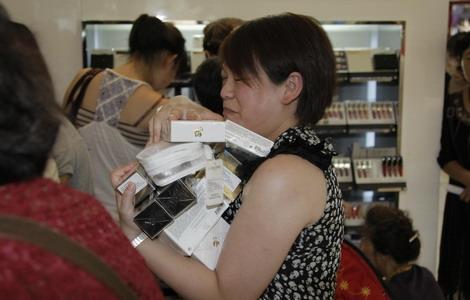 A woman carrying an armload of international perfumes and other cosmetic products makes her way toward a cashier at a duty-free shop in Sanya, South China's Hainan province. Foreign fragrance makers control 60 percent of the Chinese perfume market. [China Daily]

"Fragrances make me feel energetic," Xu said, "I used to just try to hide my odor, when I was a soccer player at high school."

The peak season for fragrances starts in the summer and lasts until February.

The small market share of international perfume companies hold does not shake their confidence in doing business in China - after all, it is a growing consumer market for cosmetic products.

But every time they plan to launch a new product or a brand in the marketplace, they have to first train consumers.

China is Asia's second-largest cosmetics market, and the eighth in the world, but perfume makers get only a tiny slice of that market because fragrances are not considered a basic necessity in Chinese beauty care.

The cosmetics industry saw an 88.9 billion yuan turnover in 2010, and the figure is expected to exceed 100 billion yuan in 2011, according to the National Bureau of Statistics. But fragrances account for only 1 percent of that.

According to Euromonitor International, a London-based company that conducts strategy research of consumer markets, China had a 3.77 billion yuan fragrance market in 2010.

A report released by Horizon Research Consultancy Group in 2010 said that Chinese consumers bought only 1 percent of the fragrances in the world - but the Chinese market has grown by 15 to 25 percent each year since 2008.

Foreign perfume makers, who control 60 percent of the Chinese market, see the slow pace of consumption as their biggest problem.

"In our consumer research, we found that lots of consumers love the design and the scent of fragrances, but they're not in the habit of using them every day," said Ghislain Devouge, general manager of P&G Prestige Greater China.

Devouge, whose company owns perfume brands including Gucci, Dolce and Gabbana and Hugo Boss, attributes the low rate of usage to a lack familiarity with fragrances.

"We try to address the lack of category knowledge via our in-store brand ambassadors and online activities," Devouge told China Daily.

The company also organizes workshops about the history of perfume and usage tips, he said.

However, business insiders say physiological factors play a larger role in the Chinese people's less frequent use of perfume.

Westerners use fragrance to hide their body odor, and it is a daily necessity in the West, but the situation in China is different, said Wu Zhigang, chief marketing consultant of Shengshi Chuanmei Consultancy Co.

"Fragrances do not have as long a history in China as in the West," Wu said.

The Chinese began using scented soap in the early 20 century and fragrances from the West came to China in 1980s. The original function of perfume in China has been lost, and fragrance, which is important in daily life in the West, is dispensable, he said.

"Foreign perfume companies should find a strategy suited to the market, if they want to develop the business in China," Wu said. "They should pay more attention to consumers' preferences," he said.

Chinese consumers have different tastes from those of Westerners, which is why some fragrances popular in the West have weak sales in China, said Zhao Peng, a perfume consultant with ADE China Co Ltd, a distributor of some foreign perfume brands, including Bvlgari, Hugo Boss and Davidoff.

Eastern fragrances from India or Nepal are also among their favorites, because the strong exotic scents can mask their body odor caused by their dietary habits, Zhao said.

Chinese consumers prefer light, flowery fragrances, which conforms with Chinese emotional reserve, he said. Cologne, for instance, which contains less perfume, is acceptable to many male professionals in China.

Coty Inc, the world's largest fragrance manufacturer by turnover and the owner of Davidoff, Chole and Calvin Klein, launched Cool Water, the flagship product of Davidoff, as soon as it entered China in 2000. That product is still one of the best sellers in the market because of its fresh fragrance.

When Prada launched its perfume in Asia, most consumers did not accept its strong fragrance. The Italian luxury brand substituted Prada Tender - a softer perfume.

"There are still very few fragrances designed specially for the Chinese because of the high cost of research," Zhao said. "Companies can't recover their costs from China's small market."

But Devouge said China is definitely a high potential market for fragrances.

The younger generation, which has more contact with the Western lifestyle than their parents' generation does, is the main buyer of fragrances in China.

"Fragrance buyers in China have obvious characteristics," said Zhao Peng, "They are younger than in other countries."

Zhao said young people think perfume can improve their quality of life and it is a mark of courtesy to others.

Fragrances are a kind of gift rather than daily necessity, said Zhao Shicheng, chief executive officer of Shangpin.com, a luxury online retailer in Beijing.

Zhao said the high season for perfume starts in the summer and lasts to Valentine's Day in February "because the second half of the year has various holidays, such as Christmas and New Year". Sales typically decline from March.

Shangpin.com, which markets more than 100 perfume brands, including Burberry, Gucci and Channel, sold about 2,000 bottles of perfume in June and July, Zhao said.

"Our turnover soared by 40 percent in the days leading up to the Chinese Valentine's Day," said Zhang Ting, a perfume saleswoman at the Beijing Modern Plaza.

Zhang said most of her customers were buying perfume for their girlfriends or wives and one young man bought three bottles because he was not certain which one his girlfriend would like.