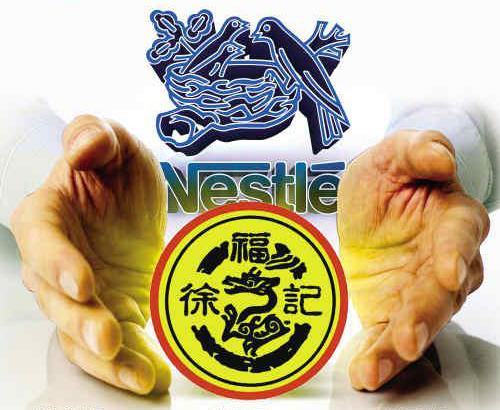 
Nestle SA's biggest acquisition in China is giving traders a chance to reap a 23 percent profit without the risk of losing any money on the deal.

After surging above the all-cash offer of S$4.35 a share, Hsu Fu Chi has given up all the gains as stocks around the world plummeted.

While Nestle, the world's largest food company, needs antitrust approval from China for the deal, traders can lock in an annualized 23 percent return if the transaction closes by year-end, according to data compiled by Bloomberg.

Since China's anti-monopoly law took effect three years ago, the Ministry of Commerce has blocked only one of the more than 200 takeovers it has reviewed, the law firm King & Wood said.

Hsu Fu Chi would give Nestle the biggest share of China's market for sweets without dominating an industry where rivals control more than 90 percent of sales.

"You can see a guaranteed upside," Alick Wong, a research analyst at Louis Capital in Hong Kong, said in a telephone interview. "Technically and fundamentally it is a good trade."

Robin Tickle, head spokesman for Vevey, Switzerland-based Nestle, declined to comment on the purchase because of the review.

The Ministry of Commerce didn't respond to a faxed request for comment on Nestle's deal with Hsu Fu Chi.

Nestle, which makes Nescafe instant coffee, Kit Kat candy bars and Jenny Craig weight-loss products, said in a statement on July 11 that it agreed to take a controlling stake in Hsu Fu Chi. The rest would remain with the Hsu family, the statement said.

The deal, Nestle's largest in China, would also be the biggest cross-border deal for a mainland company outside the banking industry since 2004 based on equity value, data compiled by Bloomberg show. Nestle, which has more than $8 billion in reserves, will pay for the transaction in cash.

The deal will help Nestle, valued at about $210 billion, tap demand in the world's most populous nation.

Sales at Hsu Fu Chi will increase more than 20 percent next year, according to data compiled by Bloomberg. Analysts estimate that Nestle's revenue will rise about 3 percent in 2012.

"It's ultimately China," Sachin Shah, a merger arbitrage strategist at Tullett Prebon PLC in Jersey City, New Jersey, said in a telephone interview. "They want to increase their presence in China, and I'm sure they're going to work with the insiders on cultivating this business."

Hsu Fu Chi, which jumped to S$4.40 after the announcement, has fallen for four straight weeks on concern that regulatory scrutiny will cause the deal to be delayed or fall apart.

Under China's anti-monopoly law, an acquisition that leads to "decisive influence" in the market and involves companies that exceed certain sales levels needs the approval of the Ministry of Commerce, according to Michael Han, a Beijing-based partner at law firm Freshfields Bruckhaus Deringer LLP.

The formal review process may take up to 180 days, he said. The commerce ministry received Nestle's application to buy Hsu Fu Chi, said Yao Jian, a ministry spokesman on July 15.

Through May, the commerce ministry reviewed 240 mergers under the anti-monopoly law, according to a newsletter in June from Beijing-based King & Wood, which cited Director General Shang Ming of the ministry's anti-monopoly bureau.

It approved 233 acquisitions, cleared six deals with certain conditions and rejected only one, the newsletter said. About half were approved within 30 days.

The ministry blocked Coca-Cola Co's $2.3 billion bid for China Huiyuan Juice Group Ltd in 2009, saying at the time that the combination would hurt competition.

The deal would have combined China's largest and third- largest juicemakers and given Coca-Cola a 17.5 percent share of the market that year, according to Euromonitor International.