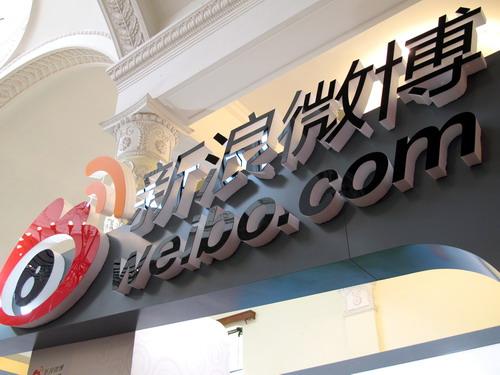 A Sina Weibo logo on a wall inside an office building in Shanghai. The development of new media has forced companies to recognize their customer services should not be limited to stores or call centers, but should also expand online. [China Daily]

Imagine this: You post a micro blog complaining about a company's service and, although normally only your family and friends would pay attention to it, the company replies to your micro blog and apologizes in just 10 minutes.

With the appearance of new media, more companies are finding that their customer services should not be limited to stores or call centers, but should also expand online. The Internet has significantly changed how the world does business, even how a company carries out its customer services.

"Twelve years ago, if you wanted to complain to a company about its poor customer service, you even couldn't find a place or person to complain to until the emergence of the customer call center," said Li Nong, vice-president of the US-based business communications systems provider Avaya Inc (China), which was the first group of companies to bring call centers into China in the 1990s.

The Industry and Commercial Bank of China (ICBC) Ltd, the country's biggest lender by market value, was the first company to establish a call center in China, in 1998.

The revolution in customer service has begun anew, moving the stage online. ICBC is still providing customer services by phone but has also opened a micro blog on Sina Weibo, which has attracted more than 7,000 followers.

The new technology and trend require companies to keep an eye on the Internet at all times.

Zeng Zhihui, general manager of a consulting company in Beijing, purchased 12 months of broadband service costing more than 1,000 yuan ($156.25) from telecommunication company China Telecom in March. However, he found his broadband service was abruptly disconnected in April.

He called China Telecom, which replied that because his account owed China Telecom 0.1 yuan, his broadband was disconnected. In order to re-establish his Internet service, he would have to pay the 0.1 yuan online, which was impossible, or buy a charging card offline.

Zeng was unhappy about this and posted a message on his micro blog complaining about this. In just a few hours, he received many replies and comments. Shortly after, he found that his broadband was re-connected.

The company said they had seen his micro blog and temporarily reconnected his Internet for one hour so that he could pay his bill.

According to the company, China Telecom used Zeng's situation as a case study in its internal meetings and signed a cooperation agreement with Sina Weibo to provide online customer service.

"Companies are only beginning to notice the influence of new media and they will face more challenges later on," said Li from Avaya. In order to adapt to changing trends, Li said Avaya has developed its old call center platform into a multimedia connection center.

China's Internet user numbers reached 485 million, of which 195 million subscribe to a micro blog service, according to statistics from China Internet Network Information Center in July.