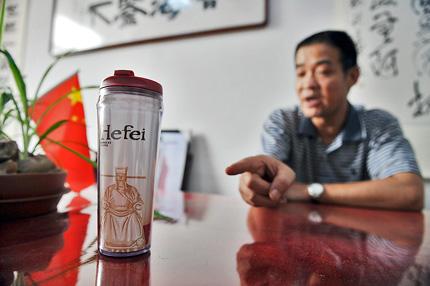 Bao Xun'an, a descendant of one of ancient China's most renowned judges, points to a bottle bearing the image of his ancestor. Seattle-based coffee chain Starbucks began selling mugs and bottles decorated with a picture of the 11thcentury judge Bao Zheng after it opened its latest branch in Hefei, capital of Anhui Province last Sunday.

A descendent of one of ancient China's most renowned judges is planning to sue a major coffee shop chain after he spotted his ancestor's face on its mugs.

Starbucks ran into trouble after selling souvenir coffee mugs and bottles featuring an image of the 11th-century judge Bao Zheng when it opened its first branch in Hefei, capital of central China's Anhui Province ... and Bao's hometown.

Bao, more commonly known as Bao Gong, was a senior official in the Song Dynasty (960-1279) and held in high esteem for his strictness in upholding justice and opposing corruption, and his refusal to bend to an unlawful power.

He has long been a model for just officials.

The 90 yuan (US$14) mug proved immensely popular, with more than 100 sold in under two hours after the store opened on Sunday, Xinhua news agency said.

"Bao Zheng would surely feel angry if he knew that his face was on mugs being sold for profit," Bao Xun'an, a 36th-generation descendent of Bao, said yesterday.

Bao Xun'an, who heads an association that studies and promotes Bao Gong's spirit of integrity, said his ancestor had passed down a warning to later generations never to earn "ill-gotten wealth."

He claimed the mug was worth 10 yuan at most, but was being sold at nine times that price with his ancestor's face on it.

"Moreover, his face is not right and he looks like a foreigner," said Bao.

He said Starbucks' marketing strategy was disrespectful and could even be a violation of intellectual property rights, because his association had a patent for "Bao Zheng" logos.

Bao said he required Starbucks to stop selling the mugs or he would sue.

"If the company uses a proper image of Bao Zheng's face on some free souvenirs to promote Bao's spirit, I can authorize them to use the face free," he said.

Li Jing, a Starbucks China public relations manger, said yesterday that the image of Bao Zheng was a hand-painted version based on his statue in the memorial temple in Kaifeng and not the patented logo.

"We confirmed the copyright of the image through legal consultancy before using it on the cup," said Li.

Li said the company was investigating the case and would double check the rights to use the image.

Nobody knows exactly how Bao Gong really looked like, but Chinese literary works usually portray him as having a black face and a crescent-shaped scar on his forehead, a symbol of impartiality and judiciousness.