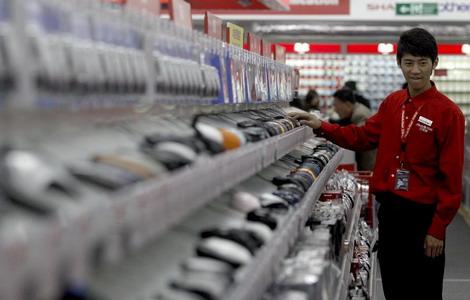 Media Markt's first outlet in Shanghai. The Germany-based company plans to have six or seven stores this year. [China Daily]

The electronics retailer Media Markt, owned by the German group Media Saturn Holding, plans to have six or seven stores by year-end, all in Shanghai, a senior company official said.

Former Chief Executive Officer of Media Markt China Ltd Ton Wortel left the position in August for "personal reasons", according to the company, about nine months after it opened its first store in Shanghai.

Wortel's sudden departure led some observers to speculate that Media Markt's operations in China were not doing as well as expected.

However, Frank Bussalb, the newly appointed CEO of Media Markt China Ltd, said: "We are completely on our plan and even a little bit more than we planned."

He said he hoped the company will be able to open 100 stores a year sometime during the next decade, but he did not say what year it will be and what the total number of outlets will be.

Bussalb said he hoped the target could be achieved "as fast as possible".

Even if the company achieves that goal, it will still be very difficult for it to compete against local giants Suning Appliance Co Ltd and Gome Electrical Appliances Holdings Ltd, which each already have more than 1,000 stores now.

Media Markt entered the Chinese market in November 2010. It now has three stores in Shanghai, with a fourth to open next month.

Under an earlier plan, the company was to expand beyond Shanghai in 2013, with 100 stores nationwide by 2015.

Bussalb said his company wouldn't focus on competing with the local giants solely in terms of store numbers. He said other factors could be used to evaluate the performance of a chain store, such as service quality and profitability.

Given its recent arrival in China, Media Markt has said it would continue to develop its localization strategy and seek to understand Chinese customers.

It would also vary its store sizes and offer products across a full price range to satisfy consumers' needs.

"We are not setting up a German company here. We are local and customer-oriented", said Bussalb.

The company also plans to seek growth through e-commerce, but Bussalb did not give an exact timeline.

"Multi-channel (retailing) is a must. When it is appropriate, we will carry out our online business," he said.