Mr. Pei travels in the pavilion Western Hunan of China

Mr. Pei travels in the pavilion Western Hunan of China 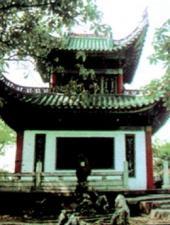 Pei GongTing, lies in the bank of the South of money, on the white deer mountain in the west of the south of the bridge of Ziyang, it is a pretty and cleverly-made pocket park in Yiyang urban area, it is a good destination where citizens spend holidays on two-day weekend. Pei GongTing, famous prime minister Sue Pei repaired for commemorating the Tang Dynasty. Pei stops words commonly and American, the people in Henan Jiyuan county, learned and multi-functional, the worker draws in the poem, is good at calligraphies, when the intersection of Tang and the intersection of constitution and case, he let the intersection of the Ministry of War in feudal China and assistant minister and concurrently the intersection of neck and all the intersection of salt and the intersection of iron and history, promote to, hit He of book assistant minister prime minister, transport the long-standing abuse in reform Cao, prevents the fence town from being tyrannical, there are achievements. Demote, let Jing Nan the intersection of verse and one degree of history old age, concentrates on Buddhist study of Confucian classics, often from way to Yiyang, live for a short period of time on ten and a half days month, form the reed in the riverside and study and chant scriptures, later on people are in the green hill cloud tree, have built to Pei GongTing that the pavilion of a building unified, for Pei Gong to study to live for a short period of time. Very glad Gong Pei, so enchanted by the scenery as to forget to return, bright reading chant scriptures, attract the celestial white deer, stop, listen.
Pei GongTing in ancient times, goes through all changes and declines abolishing, the ancient looks has already been had no way of ascertaining, Pei GongTing donated some money to rebuild by the place in 1923, the pavilion is three storeys high, powerful, Pei GongTing who there is the straight book on the door The intersection of door and horizontal inscribed board, enshrine and worship striking common portrait in the pavilion, Guo, governor of a province of Jiangxi, virtuous and the Imperial Academy reach source two the intersection of spirit tablet and card of sage of the past by moustache by bachelor Qing Dynasty in end of Ming Dynasty in Yiyang with born. Step on pavilion, carry, view the intersection of Yiyang and ancient city in the far distance, if the whole stream was emerald green, surging north go, flow into Dongting Lake; 5 kilometers of rough stone streets of Jiangbei, merchants gathered, the business is flourishing. A pleasant drawing, really make us completely relaxed and happy. And because of Pei GongTing, builds in accordance with the river, the ancient tree encircles, look the color of tree from far vastly, the cigarette cloud curls up elegantly. Chanted by black guest and called Pei pavilion the intersection of cloud and tree ,It is one scene in ten ancient scenes in Yiyang. Pei GongTing standing erect in the bridgehead now, built again in 1982, it had already kept the style of classical building pavilion, rich in modern architecture and magnificent again. Three vigorous and forceful running hand words on the pavilion: Pei GongTing, is inscribed by Mr. Zhao PuChu, president of Chinese Buddhist Association.
Both sides of pavilion door, are carving a striking antithetical couplet: Pei pavilion the intersection of moon and latent millennium tree, white deer clock go back cloud under Wan. In the intersection of pavilion and layer of drawing rooms, have one drawing a portrait all over common Pei, go money river in the face of surging the north, the look is so graceful and elegant. Mount the pavilion to carry, take panoramic view from some vantage point, a scene of window one, a picture of one party. Look northwards, the rainbow crosses the north and south, Yiyang Building washes the clouds; Look southwards, bustling with vehicles on the national road, the ancient city as unfaithful to her husband as one will come; Look eastwards, the riverine scene repaired newly is taken, reappear and look in west gulf spring Draw; Look westwards, thousand lies of the intersection of money and river such as colored ribbon, white deer group carve under the pavilion listening march of ancient city . Pretty and cleverly-made Pei GongTing, incorporates calling the pavilion together in the floor into an organic whole, the river trees flowers and plants flowing water is in a place, pavilion have famous the intersection of writer and Ye Zi commemorate platform week, gather the intersection of Yiyang and artistic long corridor that ancient 10 scene draw, mould white deer group to carve, the artificial stone clock, open and deep and remote meander step, small and exquisite Wangjiang pavilion, a holidy, stroll and visit Pei Ting, it is a kind of beautiful enjoyment that really can yet be regarded as. Chant Mr. Pei pavilion (bright) Luo permits cliff of weighing apparatus and faces the small piece of land surrounded by water of river, it is virtuous in former times that ascend a height and face upward; The grass pavilion is empty and quiet and quiet, the cloud tree is still just the same as before.