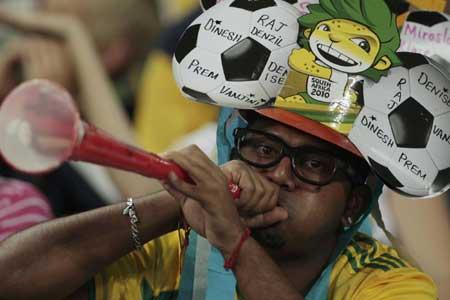 A soccer fan blows the vuvuzela trumpet before the start of the 2010 World Cup Group D soccer match between Germany and Australia at Moses Mabhida stadium in Durban June 13, 2010. [Agencies]

CHANGCHUN, JILIN: Early in the dawn, many parts of Beijing is still quite alive as tinking and chinking of glasses and cheering mingled with the sound of Vuvuzelas coming from the TV sets filled in the air.

When fans around the world celebrate the World Cup soccer extravaganza in the greatest global party, Chinese merchants begin to embrace the sales boom brought by the World Cup.

As the World Cup has arrived, restaurants, bars and even the sidewalk snack booths in numerous Chinese cities such as Beijing, Shanghai and northeast Changchun opened overtime during the tournaments to profit more.

According to a survey launched by renren.com, one of the biggest SNS website in China, 67.2 percent of voters spent 50-100 yuan at pubs while watching the World Cup there, and over 70 percent of them will buy the World Cup souveniors or team jerseys.

Household electrical appliances also sells much better than before, especially the flat-screen Television.

"The sales volume of the flat-screen television here rises by 1.6 times compared with the same period of last year," said Xu He, a salesman of the franchise in Changchun city of Gome,one of China's largest electronics retailers.

"A lot of customers bought new TV sets for better visions of the World Cup live. Most of them are eager to take new televisions back home," Xu added.

A more indirect impact of the World Cup has been an increase in the export of wigs and other accessories donned by sports fans during matches.

As the World Cup has arrived, she is happy with the flow of orders of national flags for soccer fans.

"I get much more big orders than before, most of which are from leading footbal nations like Brazil. My business is getting better and better." Li smiled.