The global elite of the chemical-based advanced materials industry will meet in Chengdu, capital of Sichuan province, from May 6 to 8, for the third International Advanced Materials Summit (IAMS).

The summit will be co-hosted by Chengdu city government, China National Chemical Corporation (ChemChina), Germany-based Society for Chemical Engineering and Biotechnology, Deutsche Bank and the Association of International Chemical Manufacturers. 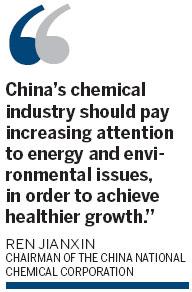 Attendees will discuss the 12th Five-Year Plan (2011-15), and the future development of the industry. Their focus will be the critical need to boost the technology in China's chemical industry.

"As one of the top events of the chemical and material industries, the summit has a good reputation in China," said Fan Xiaosen, vice-president of ChemChina.

Government officials, top scientists, investors and decision makers from multinational companies and leading enterprises in China will take part in the summit. They will exchange the latest information about the industry, and share ideas.

Gu Xiulian and Cheng Siwei, former vice chairmen of the Standing Committee of the National People's Congress, and officials from the State Development and Reform Commission, the Ministry of Science and Technology and the Ministry of Industry and Information Technology will attend the summit and make speeches.

The summit is important for the government of Chengdu. As a base of the petrochemical industry in southwest China, it will introduce a series of subjects for the delegates to discuss.

"We hope the summit will boost the reputation of Chengdu as an important economic zone and a new growth point in west China," said Ge Honglin, mayor of Chengdu.

"In China we have seen a large gap between strong domestic need and weak productivity," said Fan, "Compared with traditional materials, they (the chemical-based advanced materials) stand out for their excellent performance or special functions. They will make a great contribution to the national economy, especially the high-tech sectors."

The first IAMS was held in Hainan province in 2007, and the second was held in Tianjin municipality in 2009.

The official website for the 2010 IAMS has been completed (http://iams.chemevent.com.cn). Media are welcome to attend the summit.