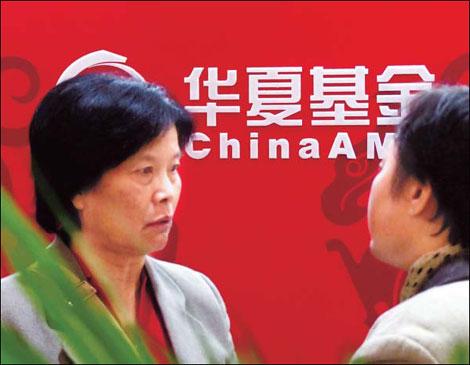 "The selection is still in the initial stages and it must be eventually realized through a public bidding process," the source told China Daily on condition of anonymity, but did not elaborate which companies are on the candidate list.

China Asset Management Co, the country's largest fund manager with some 300 billion yuan ($44.18 billion) under its belt by the end of 2009, is one of the asset management companies that may be selected, with future investments made through its Hong Kong unit, Bloomberg reported on Thursday. But spokeswomen at CIC and China Asset declined to comment on the issue when contacted by China Daily.

The move, if it materializes, would be the first time that CIC, set up to diversify the nation's foreign exchange holdings, picks Chinese companies to oversee foreign investments on its behalf thanks to the improvement in domestic fund managers' capacity after a decade of development, analysts said.

"The move might indicate that CIC is following in the footsteps of the nation's social security fund, which has authorized a dozen renowned Chinese asset management companies as outside managers to invest its capital in the past few years," said Liu Mingjun, a fund analyst at Cinda Securities.

Currently, there are 22 Chinese asset management companies that are qualified for investing in the overseas markets under China's regulatory mechanism for Qualified Domestic Institutional Investors.

Besides China Asset, other domestic fund managers, like Bosera, Efund and Harvest Fund, are also competent for the CIC bidding, Liu said.

"The investments are likely to focus on Chinese equities traded in Hong Kong and New York, as Chinese fund managers usually have better knowledge and judgment on the investment value of Chinese companies than their foreign peers," he said.

After some of its overseas assets soured due to the global financial turmoil in 2008, CIC kept its powder dry and accelerated its investment pace only since the middle of last year.

Jin Liqun, chairman of CIC's supervisory board, said earlier that some 90 percent of the fund's available capital has been deployed so far if the projects that are pledged to invest in are taken into account.

The company's 2009 annual report showed it made a return of 11.7 percent on its global investment portfolio last year, with over 32 percent of its assets in cash or cash equivalent products, 36 percent in global equities, 26 percent in fixed income securities and 6 percent in alternative investments by the end of 2009.

CIC is still in the process of expansion since it was set up in September 2007. It embarked on its latest large-scale recruitment drive in July with 64 positions being advertised.