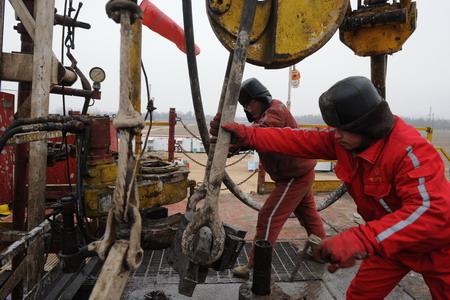 That's amid an expansion of exploration in western China and overseas as rising oil prices continues to erode profit margins at the company's refining division.

Sinopec said that its future sustainable development will depend partly on further discoveries or acquisitions of oil and natural gas resources.

The company will invest 54 billion yuan in the exploration and development sector in 2011, accounting for 43.8 percent of its total capital expenditure.

The surge in crude prices last year cast a shadow over Sinopec's refining division, which saw operating profit fall 42.2 percent from the previous year to 15.85 billion yuan, while the exploration and productions unit surged 97.3 percent in the same period to 47.15 billion yuan.

"Sinopec's gross margins in the refining sector were largely squeezed by rising crude oil prices and the country's controls on fuel prices. We're also not optimistic about its earnings this year," said He Wei, an analyst at BOCOM International Holdings Co.

The refiner imports more than 80 percent of its total crude oil processing volume, said He. As such, it's going to be a tough year for the company if the oil prices continue to rise.

Domestic fuel prices, which are tightly monitored by the government, were raised by up to 4.5 percent in February.

The fuel price move is based on a mechanism that was introduced in 2009. It allows the National Development and Reform Commission to adjust fuel prices when crude prices change by more than 4 percent over 22 working days.

However, the price adjustment was much smaller than the surge in crude prices because of the government's curbs on inflation.

"The crude prices that are currently beyond the fundamentals are not our major concern. Instead, the fuel price adjustment, which has largely trailed behind the oil price, will cause difficulties for us," Rong Guangdao, president of Sinopec Shanghai Petrochemical Co, said in an exclusive interview with China Daily in March.

Rong said that refining capacity will grow to 16 million tons this year from about 10 million last year because of technological innovation, but there is no plan for further expansion of capacity through large investment.