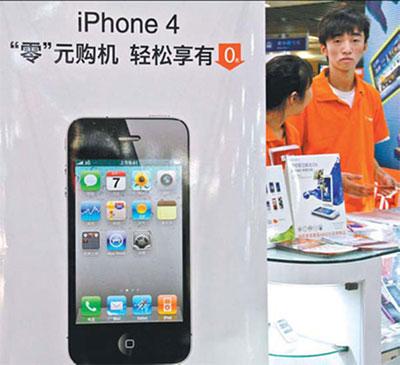 An iPhone 4 poster at a China Unicom store in Nanjing, Jiangsu province. The Chinese telecom operator has benefited after working with Apple Inc. [Photo: China Daily]

China Unicom, the country's second largest telecom operator, announced Wednesday its net profit hit 3.85 billion yuan in 2010, dropping by about 55 percent on a yearly basis, due to the expenses of expanding its networks and promoting 3G business in the country, China Securities Journal reports.

Among China's top three telecom operators, namely China Mobile, China Unicom and China Telecom, China Unicom is the only one that saw profits decrease in the last year, according to the newly-released annual performance reports.

However, analysts still hold optimistic views about China Unicom's future based on the figure of its 3G service subscribers. Currently, the telecom giant has 16.68 million 3G service subscribers, accounting for 30 percent of the total in China; while China Mobile has 24.54 million and China Telecom 14.76 million.

Experts predicted that this year, the company's 3G service subscribers will increase to 25 million, generating earnings three time higher than that of 2010, which will lead the company to break even during the third quarter of 2011, said the report.