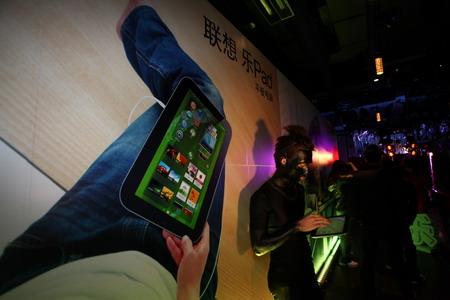 Lenovo launches its first tablet computer LePad on Monday in Shanghai. The company plans to take more than 30 percent of China's tablet computer market during the next two to three years. [Photo: China Daily]

The Chinese computer maker Lenovo Group said on Monday that it plans to launch two or three new tablet computers later this year, accelerating its pace to catch up with Apple Inc's latest iPad 2.

Chen Xudong, vice-president of the world's fourth-largest PC vendor by market share, told China Daily that Lenovo plans to launch a new tablet computer for corporate users over the next two quarters. It will also launch the second version of its tablet computer, LePad, in the fourth quarter of this year.

"Like personal computers, different users will have different demands for tablet computers," said Chen Xudong, who is also the general manager of Lenovo's China business.

He said the country's biggest computer maker will adopt a "multi-model" strategy in its battle with Apple in the tablet computer market.

Lenovo on Monday launched its first tablet computer LePad, which is based on the Android 2.2 operating system. The product, starting at 3,499 yuan ($533), comes in two versions that support Wifi and 3G services.

Lenovo said earlier that the product will be sold in the international market from June.

Chen refused to provide sales forecasts for LePad, but said the company plans to take more than 30 percent of China's tablet computer market during the next two to three years.

He also said that Lenovo's tablet computers will run between 5,000 and 8,000 applications by the end of the year.

Since its debut in April last year, iPad sales have reached 15 million. On March 2, Apple launched the iPad 2, which includes a major hardware upgrade, and cut the price of the iPad 1.

Chen said that Apple's price-cutting strategy would put some pressure on companies such as Lenovo, but emphasized that Apple's strategy has also hurt many of its sales partners in China, where the coverage of the Apple stores is still limited.

He said the recent earthquake in Japan has disrupted the supply chain for many technology companies, and that may delay the Chinese debut of the iPad 2.

According to the provider of market intelligence IDC, Chinese consumers purchased at least 800,000 iPads by the end of 2010. The research firm estimated that about 2.5 million tablet PCs will be sold through official channels in China this year, more than doubling the number in 2010.

Chen Xudong said compared with traditional desktops and all-in-one computers, notebooks and netbooks will be most affected by the popularity of tablet computers.

He noted that in the future, notebooks may have to install a mobile operating system that is more responsive to the consumers' needs.

Chen Danqing, a spokesperson for Lenovo, told China Daily on Monday that the company is also planning to launch a ThinkPad tablet computer in the near future.

According to figures from IDC, China's PC market grew by only 4 percent in the fourth quarter of last year, compared with 38.8 percent growth in the first three months.

Chen Xudong predicted that the country's PC market is expected to grow by 10 percent this year.