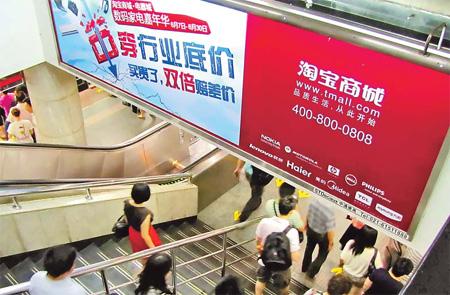 A Taobao Mall Co advertisement in a subway station in Shanghai. The company is allowing other e-commerce websites to establish stores on Taobao Mall to boost scale and increase profit. [China Daily]


Taobao Mall Co, China's biggest retail website for businesses to sell to customers, expects its transaction volume to double to 200 billion yuan ($31.3 billion) next year, boosted by initiatives such as teaming up with smaller rivals.

Zhang said profits will increase as Taobao Mall increases its scale. The company earns most of its revenue from sales commissions.

To boost its scale, Taobao Mall launched an open strategy on Monday that enables other e-commerce companies to establish their own online stores on Taobao Mall. So far, it has attracted 38 B2C websites and is in talks with others.

Currently, Taobao Mall is comprised mostly of brand-name companies, such as the personal computer maker Dell Inc and the consumer goods company Procter & Gamble Co. By teaming up with the 38 e-commerce companies, Taobao Mall includes rivals such as Yihaodian.com, an online department store that has attracted investment from Wal-Mart Stores Inc.

Analysts said that cooperation with its peers will put more pressure on Taobao Mall's main rivals, including 360buy.com, China's second-largest B2C website, and E-Commerce China Dangdang Inc, which is listed on the New York Stock Exchange.

"Many popular e-commerce websites have teamed up with Taobao Mall, which has made it more competitive," said Liu Guanwu, an analyst with the domestic research company Analysys International. "Since other big rivals, such as 360buy, Dangdang and Amazon.cn are not likely to form an alliance, each of them will in itself face bigger pressure."

Zhang said the company is open to cooperation with all companies that follow Taobao Mall users' shopping habits, such as using Alipay, Alibaba's payment arm. However, as Beijing Jingdong Century Trading Co, the operator of 360buy.com, ceased using Alipay in August, Zhang said he doesn't anticipate cooperation between the two companies in the near future.

Taobao Mall held 32.8 percent of the B2C online retail market in China during the second quarter, followed by 360buy's 12.4 percent and Amazon.cn, the Chinese unit of Amazon.com Inc, with 2.3 percent, according to Analysys International.

Taobao Mall split from the Alibaba-owned Taobao.com in June, aiming to focus on the B2C business. Two other units that split from Taobao.com are Taobao Marketplace where consumers trade with each other and the shopping-oriented search engine Etao.com.