Urgent need to save energy

Urgent need to save energy 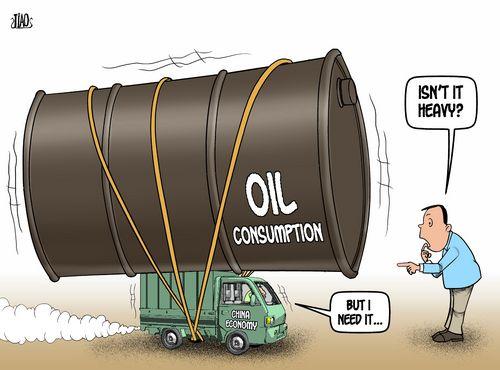 China's crude oil imports are now 55.2 percent of its total energy consumption and for the first time surpass the 53.5 percent of the United States, which points to the increasingly heavy pressure its development faces.

Despite the 1.6 percentage point drop in the rate of increase compared with the first months of this year, the growth is still sharp, outpacing that of the country's gross domestic product (GDP).

What is noteworthy is the increase in crude oil imports has occurred at a time when prices have also soared. The country imported 107 million tons of crude oil in the first five months of this year, an increase of 11.3 percent, while the total cost increased 45.6 percent over the same period last year. The imports of crude oil comprised 45 percent of the country's total imports during this period.

It is obvious that the more we rely on imports of crude oil for development, the higher the cost we will have to pay for our economic growth.

The increase in crude oil prices will undoubtedly take its toll on the prices of all commodities in the domestic market, which will add to the difficulty in reining in commodity prices and reducing inflation.

With further economic development, the percentage of imported crude oil will possibly rise still further, exerting even greater pressure on the security of the country's energy resources.

China must make greater efforts to increase its crude oil reserve and develop as many sources as possible for its crude oil imports. It is always dangerous to put all one's eggs in one basket.

In the long run for sustainable development, China must develop alternative energy. In addition, efforts to save energy and increase the efficiency of energy consumption must be further intensified.

Energy saving is of strategic importance to this country's long-term development, so the central government must be watchful of the energy intensive industries that are likely to shift to the western and central regions, which are hungry for GDP growth.