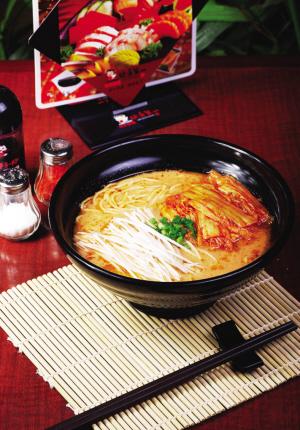 Last weekend, Ajisen was accused of using concentrates and flavoring powders to make its noodle soup base, instead of using actual pork bone stock.

Ajisen Ramen, one of China's largest fast food restaurant chains, is embroiled in a food safety scandal after allegations came to light of the chain misrepresenting its products.

Last weekend, Ajisen was accused of using concentrates and flavoring powders to make its noodle soup base, instead of using actual pork bone stock. Ajisen has fumbled to come up with an explanation.

Hao Xiong, head of the company's investor relations department, said that although the company does use soup concentrate, the concentrate is made from the broth of pork bones using Japanese processing methods and instruments.

It is then shipped to Ajisen's restaurants and is combined with water and spices before being sold.

A single kilogram of concentrate can make as many as 100 bowls of soup, said Hao.

However, his explanation only led to another round of questioning. The company has stated that its soup contains "four times the calcium content of milk and 10 times that of meat," citing a 2006 report from the College of Food Science and Nutritional Engineering at China Agricultural University (CAU).

It was later found that the test sample mentioned in the CAU report was made from the concentrate, rather than from the diluted soup base Ajisen uses in its restaurants.

"This is indeed a case of deceptive advertising," Fan Zhihong, an associate professor at the CAU who attended the Ajisen soup base test, said to The Beijing News.

"Never again will I go to Ajisen in my life," said a netizen using the screenname "Zhang Xiaodong" on the popular Chinese microblogging site weibo.com.

His comment was seconded by more than a third of participants in a Sina weibo.com poll on the Ajisen Ramen scandal.

Ajisen (China) Holdings Limited, founded in 1996, is the sole franchisee of Japan's Ajisen-branded restaurant chain on China's mainland and in Hong Kong. The company now has 585 stores across the country and was listed on the Hong Kong Stock Exchange in March 2007.

Ajisen shares have fallen by nearly 10 percent since the scandal broke out.