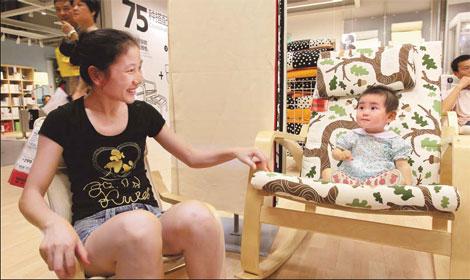 An 18-month-old child and his mother arrive at the newly opened Ikea store in the Pudong New Area, Shanghai. The Swedish retail giant has been operating in the Chinese market for more than a decade. [China Daily]

Eyeing increasing demand in the home products sector, Sweden-based retailing giant Ikea is accelerating its expansion in China and plans to have 15 stores in the country by the end of 2015.

Currently it operates nine outlets, including new premises opened on June 23 in the Shanghai Pudong New Area. The company will have 11 stores in China by June next year.

The Pudong store is the largest in Asia with a floor area of 49,400 square meters. Shanghai has become the only city in China with two Ikea stores.

The company revealed it will have three stores each in Beijing and Shanghai to meet increasing demand. A new store in the Baoshan district of Shanghai will be opened in 2014.

Gillian Drakeford, Ikea China retail president, said the company plans to open two to three stores in China annually in the coming years. As well as expanding in large cities such as Beijing and Shanghai, Ikea will also develop its presence in second-tier cities such as Wuxi, Jiangsu province.

Ikea has been in the Chinese market for more than 10 years. It has been criticized for being too conservative in developing the home products sector, opening new stores at a slower rate than some locally developed companies such as RedStar Macalline. The latter has good penetration in the high-end furniture sector and has opened 76 stores in China since 1996.

The Swedish company defended its market strategy, saying it was good for the company to establish a solid customer base and broad brand recognition. It said it is not too late to expand in China even though the property policy has been tightened.

"We need to understand the market in China and understand what people like. We need to know the factors that can make us successful. We cannot just come in and suddenly go big," said Drakeford. "We are not here for the short term. We are here to build local leadership."

Ikea said its business in China is entering into a new phrase, which will allow the company to develop at a faster pace.

Drakeford said Ikea reported double-digit growth in China over last 10 years. More than 5 million consumers visited the company's store in the Xuhui district in Shanghai annually. She expected the growth rate would be maintained over the next five years but did not give precise figures.

Some overseas companies have complained expansion is difficult in China because their business models do not fit the Chinese market. The closure of home appliance Best Buy-branded stores in 2011 has become a classic case study for retail market players and new entrants.

The fact that the Chinese remain price-sensitive is an issue that foreign retailers need to consider, say observers.

To better fit Chinese consumers' spending habits, Ikea adjusted its pricing strategy in China in recent years. It lowered prices of more than 500 products in 2009 by 20 to 30 percent. Drakeford said the strategy will be continued.

"I think the design and idea promoted in Ikea is good, but I can get similar products from a Chinese store or online at much cheaper prices. Why should I go to Ikea? " said Cai Xun, a white-collar worker from Shanghai.