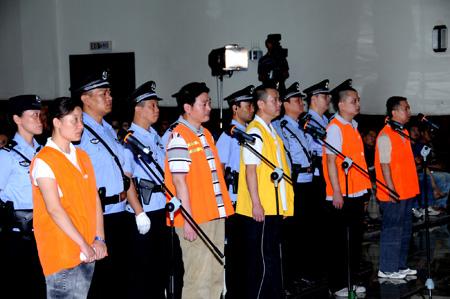 Five people convicted of illegally dealing in and producing clenbuterol, a poisonous chemical known in China as lean meat powder, received punishments on Monday that included a suspended death penalty.

Liu Xiang, a clenbuterol producer based in Hubei province, received a death sentence with a two-year reprieve. Of the three other principal offenders, Xi Zhongjie was sentenced to life in prison, Xiao Bing to 15 years and Chen Yuwei to 14 years. And Liu's accomplice, his wife Liu Honglin, was sentenced to nine years for purchasing raw materials he used in making clenbuterol.

The verdict said the five suspects produced and sold lean meat powder even though they knew it is harmful and that they distributed the substance in Henan, Shandong and Jiangsu provinces and five other provincial regions.

The hearing was open to law experts, legislators and the public - whose nerves have been frayed by a series of food scandals in China.

In March, China Central Television reported that pork tainted with clenbuterol had been found in products made by Henan Shuanghui Investment and Development Co Ltd, a prominent pork producer in China. The company later admitted to the violation and apologized to the public.

Following a series of inspections, the local police detained dozens of people, including producers and distributors of the additive, pig farmers and quarantine station employees.

The scandal brought a hailstorm of public criticism onto the company, causing it tremendous losses as supermarkets throughout China rushed to remove anything bearing the Shuanghui label from their shelves.

Shuanghui announced on Friday that it had decided to get rid of 3,768 tons of possibly tainted products. Those had either been returned from stores or were in stock in its Jiyuan branch factory, which played a large role in the scandal.

The products are to be buried in a way meant to protect the public, a process expected to bring the company a 34 million yuan loss.

Clenbuterol is banned in China as a food additive because it can cause dizziness, heart palpitations and malignant tumors. The drug is used as a treatment for asthma and has been illegally taken by athletes to build muscle issue. For pig farmers, it offers a way to bring their products to market sooner.

The five defendants in court on Monday argued that pork processing companies and government supervisors had been lax in ensuring quality standards were maintained.

"As a famous meat processor, Shuanghui should undertake its own quality inspections. How can they blame us for all of these losses?" said Liu Honglin, who is a registered pharmacist and said she hadn't known the additive would harm human beings.

The defendants also said there has been no case in which consumers got ill from eating clenbuterol-tainted meat and no one knows for certain just how much harm clenbuterol can inflict.

The debate in court also centered on the charge of "endangering public security by using dangerous means". By finding the defendants guilty on that count, the court set a precedent on Monday.

In their own defense, the accused argued that they had not intended to "endanger public security" and that their acts had not had direct and irreversible consequences. They said they should face the lesser charge of conducting illegal business activities.

At least one expert saw no merit in those contentions.

"Both the prosecution and the punishment were based on the law, because the defendants were professionals in drug production and fully knew the regulations they should abide by and possible consequences of their actions," said Liu Defa, professor with the school of law under Zhengzhou University, who attended the hearing.

All of the defendants, except the dealer Chen Yuwei, have decided to appeal the verdicts to a higher court.